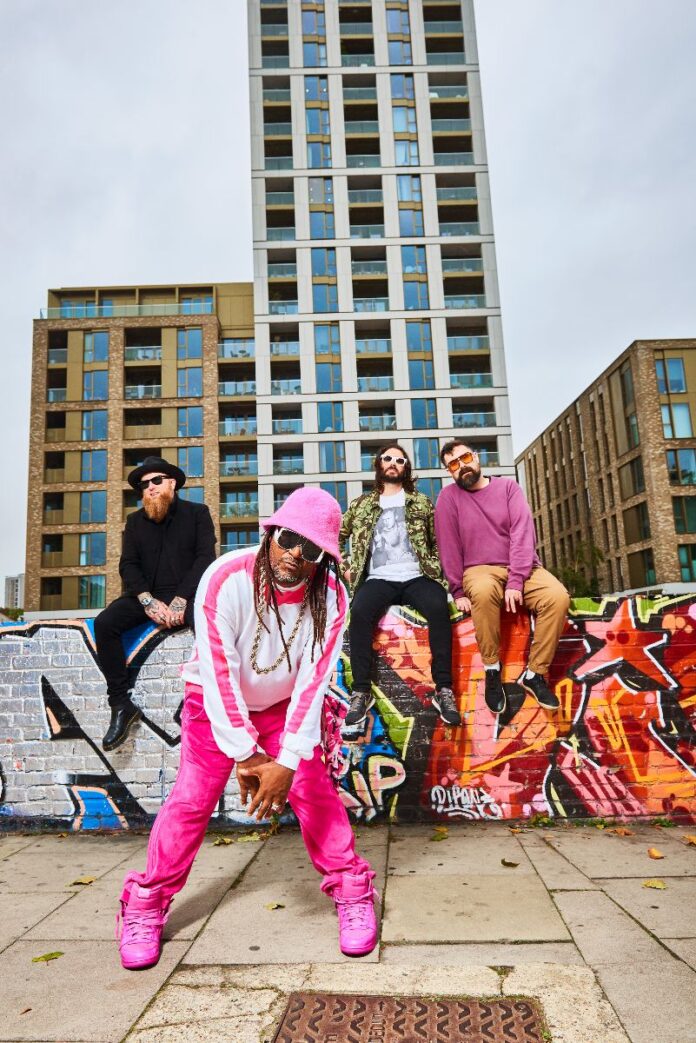 Next year, Skindred – one of the UK’s most exciting live acts – celebrate their 25th anniversary with the release of their brand new album Smile, their eighth long-player and their first for Earache Records, with whom they signed a global four-album deal last year.

Ahead of that comes the first single to be taken from Smile, the floor-quaking sonic blast that is ‘Gimme That Boom’. A hard-hitting, take-no-prisoners, ragga-metal anthem ‘Gimme That Boom’ deals with the selfish entitlement that’s become so prevalent in this age of instant gratification, based on a frustrating encounter lead singer Benji Webbe had with an overfamiliar fan.

“I was out shopping one day and I could hear someone building up asking me for a picture,” the eye-catching frontman recalls. “The person didn’t care who I was with or what I was doing – they just wanted their picture. In this day and age, people want you and they expect to get you on tap, constantly giving you that ‘boom’ so they can get their Instagram Likes up. It’s important to remember that people can’t give you that ‘boom’ all the time. People think because they follow you on social media, they own you.”

Featuring a technicolour video, shot in the neon-lit wonderland that is God’s Own Junkyard in East London, ‘Gimme That Boom’ is an incessant earworm which gives Skindred’s legions of fans a first full flavour of what to expect from the upcoming album. The band did however tease another new track from it in their astounding set at Download Festival earlier this year when they debuted the pop-reggae masterpiece that is ‘L.O.V.E (Smile Please)’ and saw tens of thousands of rock fans skanking with delight in the sunshine.

These two sides of the album, ranging from joy to rage and love to fury, suggest that Smile is going to be hailed as the band’s masterpiece; an album that brings together all facets of Skindred’s music – from reggae to metal, rock to pop, dub to electro – into the most mind-expanding and potent collection of songs, designed to melt stereos around the world when it’s released next summer.

Skindred are currently on a massive European arena tour as special guests of Volbeat. The tour rolls into the UK and Ireland in December with dates as follows:

Skindred have also just been announced as next year’s headliners of both Dominion Festival in Durham May 7th and Takedown Festival in Portsmouth April 8th 2023. For more details go to www.skindred.net/live