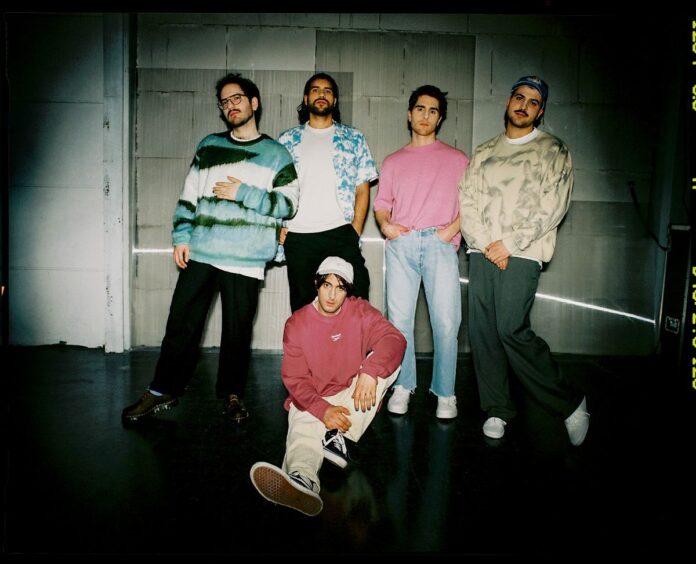 Kiel, Germany-based indie rock band Leoniden are pleased to reveal the video for their new single ‘Smile’ which is out now via Two Peace Signs.

Available to stream on all good digital service providers, the single will also be released as a limited 7″ vinyl.

The band have just played a special one off SOLD OUT headline show at The Grace in London on 17th May 2022, and are also pleased to announce they will be supporting Lime Cordiale later this year on their UK headline tour (see below for listings).

Following a #1 German official chart placement for their third album Complex Happenings Reduced to a Simple Design, the new single sees the quintet going back to their beginnings, taking a spontaneous, relaxed, DIY approach and embracing the live sound and all of its idiosyncrasies.

‘Smile’ is the perfect introduction to everything that defines the band; a driving beat, a polished arrangement with sing-along choral hooks in the verses, and a chorus that can’t be heard without imagining what we’ve all missed for far too long now: a euphoric crowd, freaking out at a festival.

Commenting on the track, the band say: “The song is a hymn to reconciliation with yourself and your own perception of reality. Dreams can sometimes make you unhappy because in the end you are never satisfied. In a world full of Instagram shininess, those perceptions can be a cage.”

Taking a conscious decision against recording in high-end studios, Leoniden recorded ‘Smile’ in their rehearsal room. Their friend Magnus Wichmann, who usually produces underground punk bands, sat at the mixing desk, and you can really hear that influence in the finished product—the band have never sounded more powerful and energetic.

Featuring brothers Lennard (guitar) and Felix Eicke (drums), Leoniden have been playing music together since they met in school at the age of eleven or twelve with JP Neumann (bass) and Djamin Izadi (keyboard), later joined by vocalist Jakob Amr.

Already finding widespread success in Germany and further afield, the band played over 200 shows in two years pre-pandemic, selling 45,000 tickets across Europe in support of their second album Again. Their third album Complex Happenings Reduced to a Simple Design reached #1 in the official German album charts, and most recently they were nominated Best Band 2021 in Germany’s biggest radio awards, 1live Krone.

The band have amassed 103 million Spotify plays, 4 million Apple Music streams, and over 5 million YouTube views, and Leoniden are now setting their sights on cracking the UK.

New single ‘Smile’ is out now via Two Peace Signs