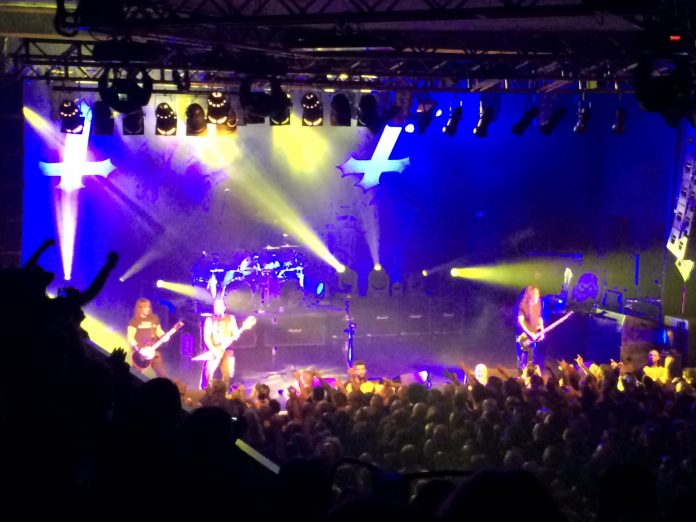 Music is a universal language they say and in the case of Kvelertak its true. Back in 2010 they delivered one of the great festival performances at Sonisphere. It’s not a a joke either to say that the band were three songs into their set before we realised they were singing in Norwegian. Everything that was great about them then is still great about them now. There’s the throw-it-at-the-wall-and-see-what-sticks attitude to the music, which takes in everything from rock n roll to black metal with scarcely a care in the damn world. There’s the fact the six of them look like they love what they do. And there’s the headgear. Singer Erlend has always had a nice line in keeping the bonce warm, but his choice tonight is pretty special. Songs? Well yeah they’ve got them too and they are brilliant, even if no sod knows what they mean. “Ulvetid” is rip roaring fun as is the closing eponymous effort. It’s clear as day. It matters not what the tongue is. Everyone understands Kvelertak are very, very good.

It’s some bill when Anthrax – that’s Anthrax, everyone, fully paid up members of the Big Four of thrash – are the support act. But the marvellous thing about Scott Ian and the boys is this: you could stick them out in the street busking and they’d give their all. Put simply, here tonight, Anthrax are for 50 minutes one of the best bands on the planet. The tedious thrash bores will tell you their most recent “Worship Music” record wasn’t thrash. Who cares? It was brilliant, as “Fight Em Till You Can’t” proves. Of course by then they’ve been “Caught In A Mosh” and they’ve also shown that not all covers are shit by racing through “Time” as though lives depend on the fact. And while they are at this, singer Joey Belladonna is busy making a couple of thousand hairy arsed Brummies eat out of his hand. “In The End”, as always dedicated to Dimebag and Ronnie James Dio, is a moment of tenderness, and “Indians” is OTT metal writ large. Just in case you wondered if they could still cut it along comes the mighty new one “Evil Twin” to boot you in the face, and they choose to finish with “Among The Living”. If it was your song you would too. Anthrax were at their best here. 2016, with a new record and a headline tour could be better still.

It’s getting close to Christmas, and a thought strikes MV during “Disciple”. You know those festive re-runs of classic comedy that are still awesome despite knowing every damn word? Slayer are the thrash metal equivalent. Granted, as far as we know the episode of the Two Ronnies where Corbett yells “God Hates Us All” is unaired, but you get the point. They’ve barely changed at all in 30 odd years and they’re not about to apologise.

If the upside down cross being projected onto the sheet covering the stage before their arrival doesn’t give it away then allow us to spell it out: Slayer are very much back, and they are pissed off, brutal, and totally repentless.

That was the title of both the album they released earlier this year and the first song they play this evening. It’s almost redundant to say it’s “excellent” or “a return to form” or any of the other usual platitudes. “Repentless” is most definitely the former. The latter implies they’ve ever dipped.

If you have ever loved thrash metal, then you know what Slayer sound like. Even now with Gary Holt of Exodus (and if thrash had a big five, them’s yer boys) replacing the tragically departed Jeff Hanneman, they still sound like Slayer should. There’s no orchestras, there’s no acoustics, no cosying up to Noel Gallagher and ridiculous records with Lou Reed here. Just 95 minutes of loud, fast brutality.

To that end, “War Ensemble” sounds like a battle cry. “Mandatory Suicide” is a threat not a suggestion, and “Disciple” almost dares anyone to challenge it’s supremacy.

There’s a pause for breath about halfway through, but only so frontman Tom Araya can explain his view on the current world situation. “Die By The Sword” – basically his point was that – kicks things off and the second 50 minutes or so is effectively Slayer giving lessons on how this is done. What’s the point in a new wave they seem to say, when the old wave is still here.

They just keep coming at you, one after the other and beat you into submission. “Hell Awaits”, “Dead Skin Mask (“a love song about loving someone too much” says the singer), “Raining Blood” – they all have to bow down to the ominous and still chilling “South Of Heaven” though and even that is bettered by “Angel Of Death”.

There’s no encore. That’d be a frill. And Slayer don’t do frills, but on this evidence they are giving masterclasses again.