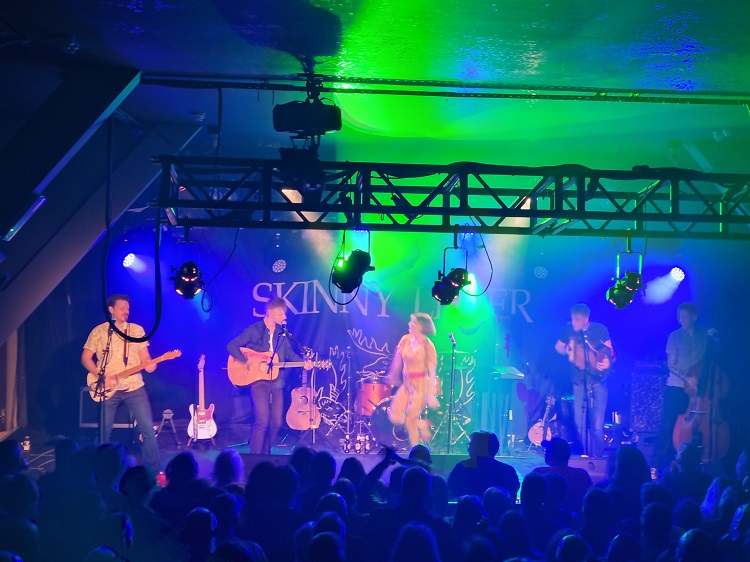 There might be someone, somewhere who doesn’t enjoy The Longest John’s. We need to check these people for a pulse. Long before Tik-tok they emerged from Bristol hoisting their thing, as it were, with more sea shanties than you could shiver your timbers at. They are glorious for two reasons: 1) this type of a-capella music warms the soul (the Young’uns anyone?) and 2) might even be more important. They don’t take it seriously at all. In the course of their 40 minutes, they host a reverb competition and say goodbye to a “weird wooden box”. There’s no need to explain either thing, given that you had to be there and because it seems that The Longest John’s existence needs to be on this stage. For every “Drunken Sailor” there’s a folk song like “Pride of the White Line Star”, for every original like newbie like “Hard Times Come No More”. Plus there’s always an eye on the trad, such as “Mary Ellen Carter”. Then, of course, there’s “Wellerman” and by the end of this, you simply can’t resist The Longest John’s.

Sometimes it’s easy to write these reviews, because the bands do it for you. Daniel Heptinstall – guitarist in Skinny Lister since they formed – just before they play “Six Whiskies”, their last song tonight, says: “Thanks for reminding us why we do this and why we’ve missed it so much.”

And, quite honestly, to understand the appeal of Skinny Lister you need to see them live. That’s not to denigrate their superb records in any way, more that as I wrote on my review of their recent “A Matter Of Life And Love” album, you listen to their songs imagining what they’d sound like on stage.

Skinny Lister are a band that seems to love playing just as much. More than once tonight front lady Lorna Thomas – very much the Centrepoint of the group – shouts “its so good to be back!” That, in other hands might sound like a cliché, but it really isn’t here. For 90 minutes here, as always when you watch them, they are simply unstoppable.

The set they’ve returned with is – by and large – a mixture of the old and new. Some of those new songs have fitted in so comfortably that it seems like they’ve been around for years, “Life At A Loose End”, the sensational “Bavaria Area”, with all its Elvis Costello-isms  and the title track are genuine highlights.

In a way, though, it doesn’t matter what they play, its more the vibe they create. There’s always the comparisons with The Levellers and Ferocious Dog, but in honesty, they make a sound all of their own.  On one hand they attack their instruments like a punk band – watch the way Dan Thomas and Scott Milsom play  – but on the other, they can sing the traditional folk of “John Kanaka” and fetch out The Longest Johns for “Damn The Amsterdam”, the song the pair play on “…Love.”

There’s a real party feel elsewhere, “If The Gaff Don’t Let Us Down”, the drinking song “Breakfast At Heathrow”, “38 Minutes” and “Bold As Brass” go by in a blur, but nothing really sums them up better than this: after taking a picture so Lorna’s dad can feel part of the show, they play “Bonnie Away” to commemorate the fact that he’s in the hotel looking after his granddaughter Bonnie. It’s a lovely, tender moment.

“This Is War” sounds like it fancies a fight in the rubble of the building site out the back, and “Trouble On Oxford Street” piles in for afters.

There’s an encore of “Raise A Wreck” and “Hamburg Drunk” before we come back to where we started. And this, really, is why they do this, and moreover, why we watch and love gigs. As they play “…Whiskies” I look below where I am sitting, and there’s people hugging each other, and you wonder where they got this camaraderie last year. The answer is they didn’t, no one did.

So to paraphrase Kiss (a band who wouldn’t understand real music and feeling if it bit them on the bollocks but nonetheless is apt here) this is their music, this is their crowd, they’re Skinny Lister – and they love it live. These are the crazy, crazy nights, and they are back.