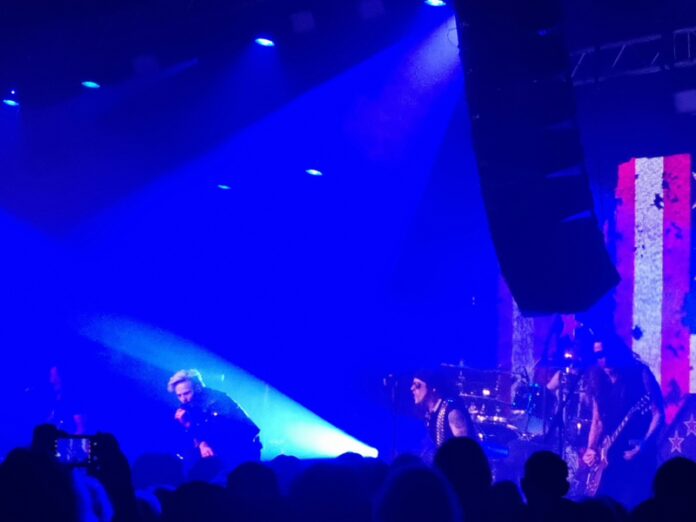 Chip Z’Nuff has, he points out a couple of times in Enuff Z’Nuff’s set, been coming to the UK for 35 years. He has reasons. Firstly “the trim, here is incredible”, and the chance to “share a smoke” with old friends in Skid Row chief amongst them, it seems. Pot and girls notwithstanding, there’s the not inconsiderable point that they’ve a new album “Hardrock Nite”, their Beatles covers record, to promote. A lot of their set is from it. “Magical Mystery Tour”, “Eleanor Rigby” and “Jet”  – in particular the middle of those – works, and that’s because (and this is the same reason EZN have been coming here this long) they are a great band with a total mastery of their craft.  “Kiss The Clown” rather proves that, and the trip back to the early days for “Baby Loves You” underlines the point that for all the line-up changes, as long as Chip is at the helm, they beat with the same warm, welcoming heart. The last two (“the reason why I’m here” reasons the frontman) include the mega hit, “Fly High Michelle” and if ever there was a song that you’d play to explain to people why they had nothing much to do with the glam scene they were forever lumped in with, it’s this one. “New Thing” sort of writes its own conclusion: look, this isn’t a new thing anymore, and everyone understands that. What it is, is this: a band that were late replacements on the bill making the most of the opportunity to play, which has always been at the heart of things with EZN. And watching Chip Z’Nuff on the merchandise table at the end, chatting to fans, rather exemplifies that this is a superb rock group, but not rock stars.

“Park Avenue leads to……” If you’re reading this, then the chances are you know the next line. But what that line does here is wash away all cynicism. In the moment, you are (and when I say “you” I mean “me”) not the bloke in his late 40s who hates his job, who feels his age, who’s football team constantly disappoints him. No, you are the 16 year old at his first gig with his best mate, you’ve got your fist in the air, just like then, and you know where Park Avenue leads…..”to Skid Row!”

That first gig was on November 20th 1991. I honestly don’t think rock n roll has ever been so exciting and dangerous since, but Skid Row do start with the same song they began with that night. “Slave To The Grind” . The title track of their second album, and as the pyro explodes, and the lights shine, you wonder if had that first gig not had such a profound effect on your life whether there’d have been thousands more.

Not that there’s chance for reverie, because the songs keep coming. “The Threat” for one, “Big Guns” for another, and that’s before the first of the huge, arena shaking hits they had. “18 And Life” clearly means so much to so many people here too.

Whilst I firmly believe that if something sounds dated now, it was crap in the first place, it is striking how fresh these all sound. A lot of that has to do with Erik Grönwall. The bands new frontman, he’s the most suited to the job in 25 years, he’s a dervish and he’s a fine singer. The last time I saw him he was in H.E.A.T and opening for Skid Row, he’s backed their faith and his own gamble.

There’s a lot of old songs, but there’s a new album and they play a couple from it. It’s their best in decades as the title track “The Gangs All Here” indicates, but watching them play it – and indeed the rest of the set – you can’t help but notice the sheer joy on the faces of the trio of original members. Dave Sabo, Rachel Bolan and Scotti Hill appear to be invigorated and it comes over in “Riot Act”, or in the cover of “Psychotherapy” that Bolan always does, while the wonderful “In A Darkened Room” arguably shows the musical skills better now than it did then.

Back in 1991 my favourite song was “Monkey Business” and it is amazing how many memories it still evokes. That might close the set, but the trio in the encore rather sum the show up. “I Remember You” harks back to the MTV days, “Time Bomb” shines a light on their 2022 vintage, but there’s only one way this was going to end. Probably the same way that every Skid Row gig ends. With their signature tune. It’s an irony given that – aside from the 12 year old at the front – not many here are young, or for that matter, wild any longer. But no matter, for five more minutes, we are. It is. They are. And they are Skid Row.

This was – and it must have been for many – a mighty fine nostalgia trip, but it wasn’t about the past, oddly. This was Skid Row, one of the best bands of their generation, re-enforcing the fact that they are very much part of the future too .