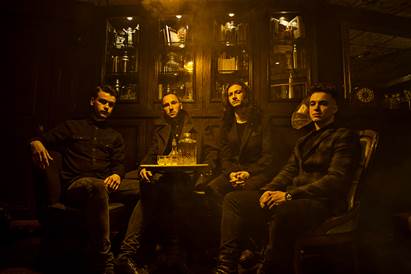 “This song is about maintaining your integrity when you’re surrounded by people who are trying to diminish it,” explains front-man Griffin Dickinson. “It’s taken from my time at school, where it seemed that being in any way different to the ‘norm’ meant you were ostracised and ridiculed for your differences. This song is both in recognition of how much it got to me, plus a reminder to never let that mentality take hold of me again.”

“The video represents someone who feels like an alien in their surroundings, alone & encircled by people who take them as some sort of gimmick, but they do their own thing regardless.”

Meanwhile, SHVPES will embark on a 17-date run of UK shows this October/November, taking in headline, co-headline & festival appearances…

Kicking off in Leicester, the first 5 shows are headliners; SHVPES will be bringing along five-piece rock band, Empire, as main support before joining forces with Press to Meco for an 11-strong co-headline run.

All SHVPES appearances are listed below:-

13 Birmingham, Rainbow Cellar (support from Wars, A Promise To Forget, No Idols)

SHVPES will also be hosting an album release party, set to take place onOctober 13th in their hometown of Birmingham. The party will take place atSubside Nightclub, following their gig at Rainbow Cellar.

‘PAIN. JOY. ECSTASY. DESPAIR.’ will be released on October 14th via Search and Destroy / Spinefarm Records.