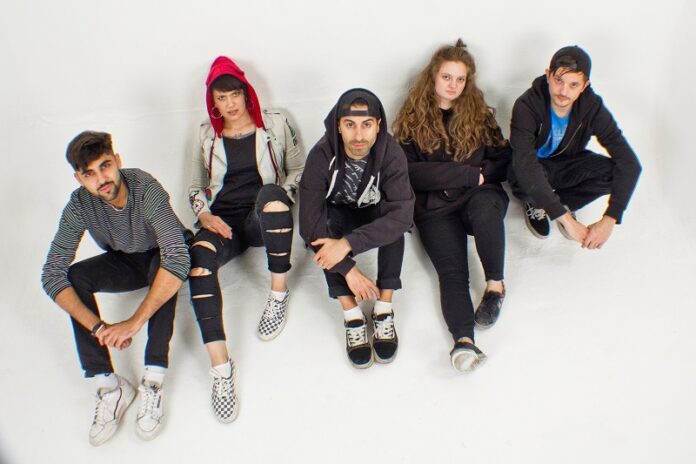 MILLIE MANDERS AND THE SHUTUP have announced that their new single, a newly recorded version of NOT OK from their acclaimed debut album Telling Truths, Breaking Ties, will be released on 8 April. The video premiere will be at 7.30pm on MONDAY 28 MARCH here:

The full band will be present at the video premiere to answer questions from fans online.

Speaking about the new single, Millie says: “Not OK is an anthem for the anxious. A mental health banger for the misconstrued. It was borne from my anxiety attacks at shows and developed by the loving musical hands of (band members) James Pendle, George Boreham, Alex Vitiello and Dom Walker, before being cooked in the studio by John Mitchell (Enter Shikari, Lower Than Atlantis, You Me at Six).”

To coincide with NOT OK, Millie and the band will be playing live throughout the Spring and into the Summer, initially supporting Less Than Jake on their full UK and Irish tour, then on their own headline Toot Sweet tour, interspersed with a flurry of festival appearances. Tickets: www.millie-manders.com

The band played their first full headline tour of the UK last autumn in celebration of the release of the album and clearly rediscovered the taste for it after, like everyone else, being unable to play live during the pandemic. Most of the dates, which included several O2 Academy shows, were sold out and cemented the band’s position as one of the most essential and exhilarating live bands in the country, with the rapturous receptions from audiences being matched by media coverage.

“Our first headline tour was nothing short of mind blowing,” recalls Millie. “As a band, we could never have imagined so many people coming out to see us and just how many voices we would hear singing our songs with us. We have made lifelong friends and incredible memories that we will always cherish.”

Fronted by Millie’s staggering vocal dexterity and backed by grinding guitars, irresistible horns and a huge amount of pop appeal, MILLIE MANDERS AND THE SHUTUP are renowned for their power and energy. With extensive support from press and radio and appearances at notable festivals such as Boomtown and Rebellion, the band have propelled themselves into the conscience of both the public and the music industry alike. With lyrics that discuss loss, betrayal, anger, anxiety, political unrest, heartbreak, bitterness, and the environment, they inspire the questioning of social norms with a cross-genre punk that has become irresistible.

TELLING TRUTHS, BREAKING TIES is available on CD and vinyl formats from www.millie-manders.com alongside a range of limited-edition clothing and artwork that raises funds for NHS Charities Together, The Survivors Trust (the umbrella charity for survivors of rape and sexual abuse) and the mental health charities Mind and Papyrus.

With the launch of their debut album, the accompanying videos for its singles, and a commitment that they will never use plastic wrapping on any merchandise or release, the band are striving to make a difference whilst keeping us brilliantly enthralled.