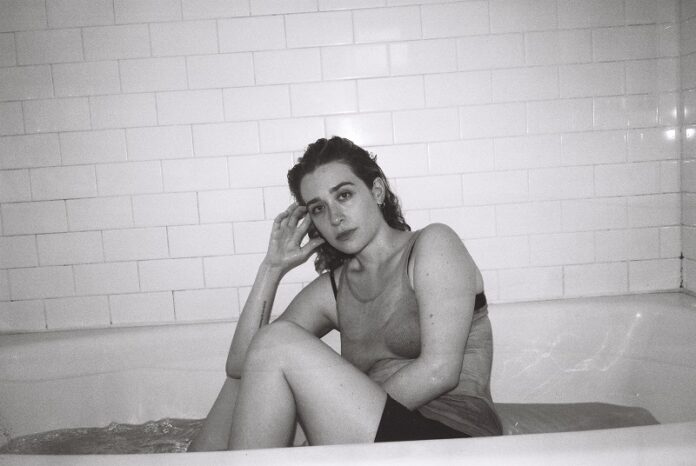 Blondshell (aka Sabrina Teitelbaum) is very excited to announce details of her debut album for the Spring.

To coincide with the album’s announcement, a new track, “Joiner”, is streaming now and exemplifies Teitelbaum’s ability to layer a wry sense of humour with weighty topics.

Describing the new single, Blondshell explains, “I was listening to a lot of Britpop when I wrote this song. A lot of those bands like The Verve, Pulp, Suede, and Blur channelled dark subject matter, drugs, and all this dirty stuff, but with a fun acoustic guitar under it. I was listening to The Replacements, too. That’s what this song was inspired by sonically. I wanted it to feel like you’re watching HBO, where even though it’s heavy, it’s still a good time.”

Blondshell is currently touring North America in support of Suki Waterhouse (following last year’s tour alongside Porridge Radio). A debut run of shows in the UK and Europe kicks off with the Great Escape in Brighton on 11th May and includes a headlining date at London’s Moth Club on 24th May. Full details of Blondshell’s live dates can be found below, with all tickets on sale now.

In the past few years, the 25-year-old Teitelbaum has transformed into a songwriter without fear. The loud-quiet excavations that comprise the hook-filled Blondshell don’t only stare traumas in the eye, they tear them at the root and shake them, bringing precise detail to colossal feelings. They’re clear-eyed statements of and about digging your way towards confidence, self-possession, and relief.

Teitelbaum starting teasing Blondshell in the second half of 2022 with the introductory singles “Olympus,” “Kiss City,” “Sepsis,” and “Veronica Mars“.

Born and raised in New York City, Teitelbaum moved to Los Angeles for music school in 2015.  Entering USC’s Pop Program, she was swept into a context where the brooding pop legacies of Lorde and Lana Del Rey reigned. She dropped out after two years, but while there studied classic and jazz theory, and the art of harmonies, and found herself writing songs inside the world of pop studio sessions.

The biggest gift the pop machine gave her was the stark clarity of realising that she didn’t quite belong there. Her music was increasingly too intense to easily categorise, and after finishing her last full-on pop EP with producer Yves Rothman (Yves Tumor, Girlpool, Porches) at the start of the pandemic, she gave herself permission to write without expectation. She began penning songs just for herself, with no thought that she would release them. The process emboldened her. Subtracting self-consciousness became a catalyst for the lucid songs of Blondshell, on which her experiences all coalesce to form her truest expressions of self yet. “It was me, as a person, in my songs,” she says. When she showed a few to Rothman, he encouraged her to write an album, joining a chorus of friends saying, “This is you.”

That bracing honesty charges every note of Blondshell. With the world at a screeching halt, she recommitted to guitar and revisited the galvanic 90s alt-rock of Nirvana and Hole, absorbing their simmers and explosions, the crests and contours that made their abrasive version of pop so potent. Immersing herself into books, too—particularly the writing of Patti Smith, Rebecca Solnit, Rachel Cusk, and Clare Sestanovich—she found patience and permission. “I loved how seriously she took her own experiences,” Teitelbaum says of Solnit’s Recollections of My Nonexistence. “It helped me not trivialise the things I was going through.”

For all its complicated, soul-baring subject matter—processing post-lockdown social anxiety, her relationships with men as well as with women—Blondshell is a comfort, and its songs often contain the perfectly-calibrated humour and levity we need to survive. “There were a lot of things that I was running away from—mainly loneliness, self-esteem stuff,” Teitelbaum says.

It all left her yearning to make the kind of music that has helped her feel empowered herself—and the way there was in telling the truth. “I always want to make people feel like they have more power and control and peace because I know what it feels like to want that for myself. I know how music has helped me get there,” she says. “What I’ve realised I need to do is write realistically, and try to not bring shame into the writing. Each song gave me more confidence. I hope the songs help people in that way, too.”