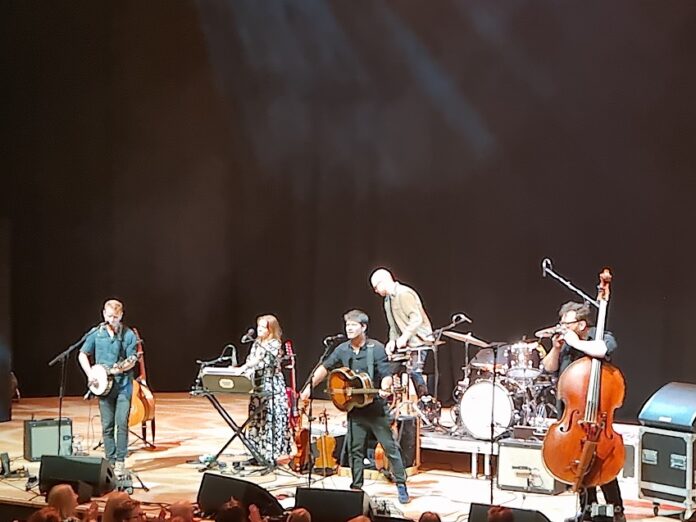 I read an interview with Seth Lakeman earlier today, its freely available on the ITV website, but this struck me: “the fact that you couldn’t get out there and get a response and connection and play [songs] in front of people,” he’d said, “I think that was a real break in the circuit of music. I felt quite lost without it.”

Those words were even more front and centre to the thoughts when in the encore tonight he’d got everyone to stand up, so he could play “Hard Working Man” and his self-styled “hoe-down” of “Race To Be King”.

At the end of them, Lakeman takes a bow with his fabulous band, and you know what? He looks happy, it looks like this is home.

Ok, that last bit isn’t literal, given that Seth Lakeman is so imbued in the West Country he might as well be chiselled from its rock. If the badlands of New Jersey, racing about on the backroads is Bruce Springsteen’s hinterland, then Lakeman’s music seems to hang in the Dartmoor air.

That he can come to just about the furthest place – metaphorically – from that land and still have his music resonate to the degree that it does is testament to the wonderful songwriting skill he possesses.

Split into two sets – roughly they could be tagged as new vs old – the first collection (“this is a bit bleak isn’t it?” he laughs) sees plenty of his yet to be released “Make Your Mark” record played, and my how the likes of “Side By Side” (inspired by a parade he watched in Cornwall) and “Shoals To Turn” (which literally uses the Cornish coastline as its backdrop) will fit in.

Another new one “Coming For You Soon” (apt considering the “blah blah blah” to quote Greta Thunberg that’s going on in Glasgow) is wonderful, and the single “Higher We Aspire” adds some positivity.

What Lakeman does so well, though, is bring history to life with his words, whether it’s the superb “Solomon Browne” or any of the others, he is a truly gifted storyteller.

He always has been, as the second half proves. It’s 15 years since his “Freedom Fields” record was released. Regarded as something of a classic, it is played in full here, with its original tracklisting, and the album named after an historic park in Plymouth, deserves its plaudits.

“The Charmer”, “The White Hare” (perhaps the only song I have ever heard about a West Country Witch)  come alive here, but “The Colliers” is arguably still his greatest song, and special mention for the band, who have been brilliant throughout, but seem especially so here, Benji Kirkpatrick, Ben Nicholls, Alex Hart (who’s harmonies are simply lovely) and John on drums, need to have the talent to pull this set off, and goodness how they do.

So much so that work like “King And Country” (for his grandfather) and “1643” take on new life, as does a sublime version of “Take No Rogues”.

A word too, for Lakeman’s unique sound. It could get overlooked in the lyrics and because he isn’t seeking the limelight, but the way he attacks that violin on “Kitty Jay” is worthy of a lead guitar axeslinger, but he’s still a folk singer in the grand tradition. It is quite a thing to see.

So tonight then? Well something old, something new? That’s all there. Borrowed? Well from history and the grand folk tradition, I guess. No blue (thankfully) but a show that underlines both the skill of the artists involved, but – perhaps more crucially to them – why they do what they do.