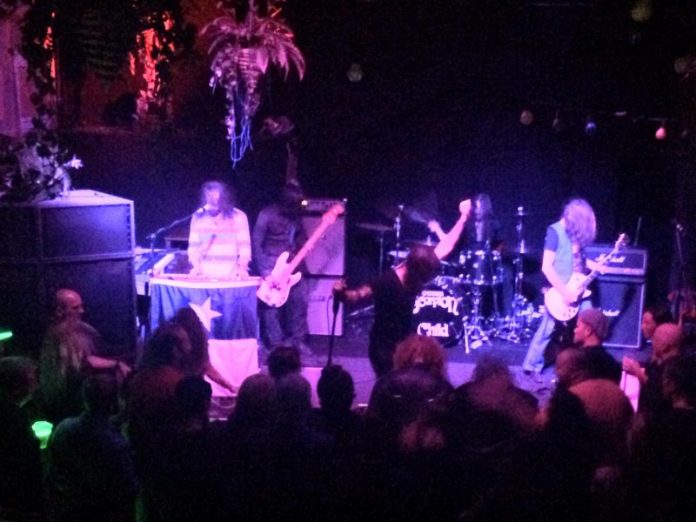 “We got some CDs for sale” says Jared James Nichols “they’re ten pounds, but we’ll sell them to the hot girls for five….” He flashes a smile that suggests that he will never go short for female company, but then he’s not short of a lot of things (and given what Scorpion Child singer Aryn Jonathan Black says about him onstage later in the evening we can assume he’s not just big in, ahem height…..) . Moving on, talent and tunes are a given and he’s got all the guitar playing chops you care to mention. He proved at Stone Free that he’s got the potential to become one of the great modern interpreters of songs as he shows here with “Cat Scratch Fever” and a mighty version of “Mississippi Queen”. Anyone can do Nugent and Mountain of course, not many can do it this well. His own songs belong in this company too, and “Play For Keeps” is blues rock excellence. As he leaves the stage he goes to the merch table and Jared James Nichols is doing a roaring trade. Whether for £10 or £5 only he knows.

Right at the end of their set, Scorpion Child are playing “I Might Be Your Man” and there is a moment when Black seems lost in the music, stood trance-like as the chaos around him carries on. After what seems like an eternity, but in reality probably only lasted a few seconds, a massive grin envelopes his entire face.

We can only speculate what he was thinking at that second, but if we may be so bold, it seems he knows. Knows that tonight has been just a little bit special. It doesn’t feel like an ordinary gig, it appears to take on greater importance than that and it had done since the moment just over an hour before when the Austin based five piece had taken to the stage.

Earlier in the year SC released an album called “Acid Roulette” which even in this 2016 of great records, might be, if not the best, but certainly right up there. The band are clearly aware of this too, considering they merrily rip through most of it.

And if there was that moment at the end of the set, then in truth, you can use that phrase for pretty much any point. There is the moment when they kick off “She Sings I Kill” and you realise they are bang on it tonight. Or how about the moment when AJ Vincent lays waste to his keyboard parts in the title track of the new record? Or perhaps you could choose the part when they do “Kings Highway”, one of the standout cuts from the debut, where that bit before the chorus goes “the tension, the tension” and its like Led Zep at their best.

Whichever one you choose, it won’t matter as there are no rights and wrongs here, just an incredible rock n roll band who deserve to playing far bigger venues than this.

Of all the brilliant new breed of bands, Scorpion Child are one of the hardest to pin down. As heavy as you like, but imbued with a mysticism, they do things their own way. “Survives” is a glorious ballad for example, but “Blind Man’s Shrine” – billed here by Black as “A little tale about Texas” – is dark, and “Reapers Danse” is nothing more and nothing less than a wonderful song. “The Secret Spot” thumps its way to the end, but any encore that includes “Polygon Of Eyes” has to be a cracker.

Towards the end of the set, Black – who had earlier done a little crowd surfing and had generally looked like he was having the time of his life – addressed the crowd: “Birmingham, can you tell every other city in the UK this is how a rock n roll show is supposed to be,” he’d more or less insisted. The answer to that is surely this: ok but can you tell all bands to be as good Scorpion Child?”

Previous article
Save In Flames
Next article
Featured Band: As The Sun Sleeps