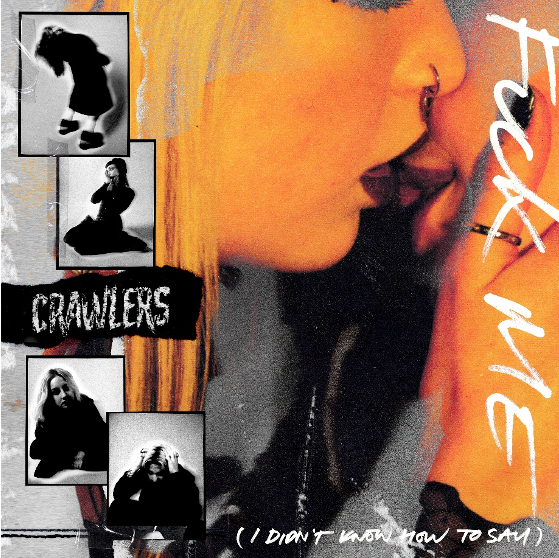 Liverpool-based four-piece CRAWLERS today share their stunning new single ‘F*ck Me (I Didn’t Know How To Say)’. The single, the band’s second release on Polydor Records, is a compelling concoction of big, grungy riffs which continues to mix the personal with the issues that matter to many in our world. ‘F*ck Me’ sees lead singer Holly Minto pivoting the lens inwards as she examines her relationship with her own body. It’s yet another example of the bold, probing songwriting that makes CRAWLERS such an important new band and a powerful force to be reckoned with.

“I know I used to be in love,” she whispers on the song. “The kisses that led to sex were close enough.”

Holly elaborates, “F*ck Me (I didn’t know how to say)”‘ is a song very personal to us as a band. The song covers two ideas behind sex. First the trauma and disgust after sexual assault, and then the idea of how at the time of writing it I haven’t felt loved and only used for my body and for sex rather than the love I really wanted at the time.”

“There’s a song that goes ‘You kiss me just to kiss me‘ and I was like, ‘Damn, I’ve never been kissed just to be kissed’,” she explains. “I just sat there and had a little moment about it and was like, ‘Have I just been letting people use me so I can feel loved?'”

Since their inception, CRAWLERS have been putting the work in, giging across Mereyside, working on songwriting and steadily building an impressive following on social media. Their debut EP – released through Modern Sky/Lab Records in October – has now clocked up over 40 million combined streams and landed the band their first hit with ‘Come Over (Again)’, which crashed into the Official UK Singles Chart thanks to fan power alone. To date it has racked up over 28 million streams on Spotify, 1.5 million views on YouTube and was a Radio 1 Tune of the Week.

After signing to Polydor Records in January, the band released new single’I Can’t Drive‘ which was Jack Saunders Tune of the Week on Radio 1 and garnered support from the likes of NME, Kerrang, Clash, DIY, Dork and Sunday Times Culture. With a sold out debut UK tour under their belts, the band announced a nationwide autumn tour with 10 headline shows including London’s O2 Islington Academy on November 2nd. Prior to this, CRAWLERSwill play a month-long headline tour of North America in June and perform at Lollapalooza, as well as fulfilling a childhood dream when they support My Chemical Romance in Warrington on May 27th.

CRAWLERS tour the UK this autumn

Previous article
GHOSTS WITH THE MOST
Next article
BND OF THE DAY: MIRROR QUEEN