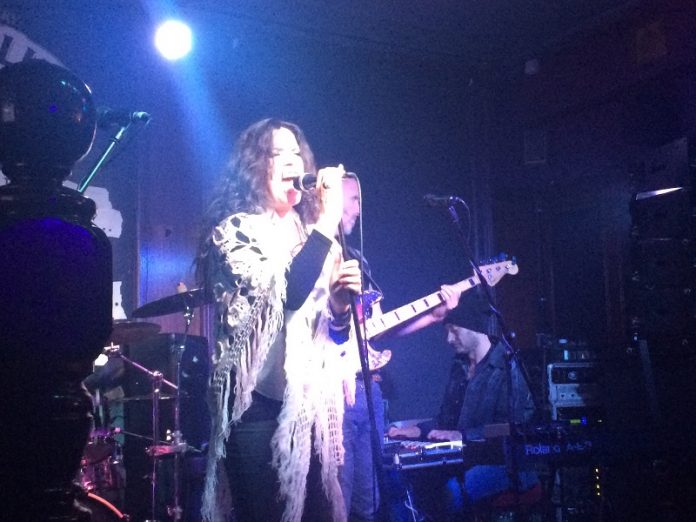 Get the motor running

New Yorker Sari Schoor has a beguiling way about her, a frontwoman of complete command and utter skill, she also possesses a pretty wicked, flirtatious sense of humour. At various points tonight – in the quite wonderful two hours she spends on stage captivating the enthusiastic crowd at The Iron Road – she suggests that “I’d like to write about English boys, but I don’t have the experience, yet”, she tells a lady she knows in the front row that they’ll have “a girls night” after the show, but will keep some men on hand “as they are good to have around” and with a wink dedicates the song “Kiss Me” to a guy that changes her microphone.

In that context, then she’d probably find it funny that when she looks straight at MV during “Demolition Man” and sings the line “you’re just the man I need…” with the sultriest look imaginable, that your humble scribe, dear reader, immediately thinks: “errr I’m probably not the bloke for the job”.

And yet, you do feel very much like you know Sari Schoor from the incredible “Force Of Nature” record that came out earlier this month and has already sold out on Amazon. This personal collection of the raw, the cover, the funk and the sassy, is after all why we are here.

Those that had seen her before were saying “yeah but she’s even better live” which presents MV with something of an issue, considering we’d already given it 10/10 and proclaimed it to be one of the best records of 2016 so far.

It still is. But those that had seen the band when they played earlier in the year were still spot on. Sari Schoor and The Engine Room are surely destined to hit very high heights indeed.

It becomes as obvious as can be after about thirty seconds into “Got No Money” that she really can sing as well as you thought she could and her band are as talented too. Innes Sibun on guitar tosses a couple of solos out during the course of the evening of jaw-dropping skill, his work on “Oklahoma” is worth a ticket alone, and moreover it becomes evident very quickly that you are watching one of the finest blues bands out there right now.

A set made up of album stuff – “Aunt Hazel” and “Damn The Reason” with their dark subject matter of heroin and domestic abuse respectively are highlights here too – as well as some well chosen covers. These range from a hard rocking, straight up cover of “Rock n Roll” to different and wonderful arrangements of “Where Did You Sleep Last Night?” “I Just Wanna Make Love To You” and their now well-known version of “Black Betty” all three of which bring out a side to the song you might not have been aware of before.

Another cover, “Stop! In The Name Of Love” ends the set, but no one is letting it end there, and a fragile, uplifting and glorious “Ordinary Life” acts as an encore and performs closing duties here as it does on the record.

Legendary producer Mike Vernon came out of semi- retirement to work with the band, so impressed was he with them, and with backing like that they probably don’t need any further validation.  However, we’ll say it too: Sari and the Engine Room are astonishingly good and whilst they have the unspoken confidence of a band that already knows that, it doesn’t hurt to reiterate it.