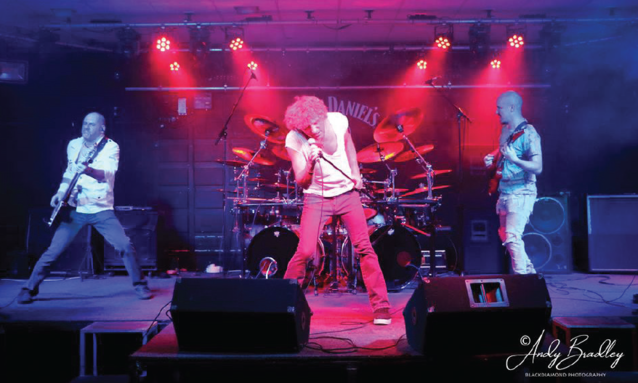 Salem UK was formed in 1979 by former Ethel The Frog members Paul Conyers and Paul Tognola. After numerous gigs and a self-released single the band split in 1983. The band reformed in 2008, releasing three four albums and touring across Europe, venturing as far as Dubai. Original members Simon Saxby (vocals) and Adrian Jenkinson (bass) still drive the band forward, now with Francis Gill (guitar), whose creative skills are a vital part of the band‘s new edgy presentation.

Adrian: We‘ve had a rough time of it over the past 18 months and there were times when we thought it was all over, but we‘ve come through, and we want to thank Steve and Tom for believing in us throughout the process. Now we‘re back stronger than ever and it feels great!

Simon: The happiest of times was had writing and recording this album and the future looks good. Many thanks to family and friends and Teresa for her hard work, love and support. A special mention to John Cudbertson RIP my friend.
Francis: I‘ve been a Salem UK fan for around ten years now. I was doing a lot of work with Adrian around the time he was mixing “Forgotten Dreams” and I loved the stuff on that record. I remember thinking back then that I would love to make a record with Simon and Adrian. Thankfully for me the opportunity to fulfil that ambition presented itself rather organically last year when I was invited to play guitar for Salem UK. I‘m immensely proud of the tracks on the new album. It has everything that Salem UK fans have come to expect, but with a much more contemporary angle in terms of the arrangement and delivery of the guitars. I may be biased, but it‘s the best yet!

I‘d like to thank Simon and Adrian for making me feel so at home in the band. We‘ve had an absolute ball making this record and playing shows all over Europe during the past year. I‘m sure there‘s much more fun to be had! I‘d also like to give special thanks to Craig Jackson from Axesrus Guitar Parts for tolerating my ridiculous (and often plain cheeky) demands. The man is a true friend and an absolute diamond!
Adrian: Win Lose or Draw is our fourth album of the modern era. It will be instantly recognisable as a Salem UK album to our fans, the classic melodic rock element is still there, and of course we have the unmistakable lead vocals of Simon. Francis brings a harder, more modern edge to the music and has certainly dragged our song writing into the modern era, which we have enjoyed very much. So now, alongside the Deep Purple, Rainbow, Whitesnake and Sabbath influences, you might just catch a suggestion of Evanescence, Lacuna Coil and Alter Bridge in there too! We are sure that fans will notice the musicianship too, we have worked our nuts off to make this album the best it can be, so that we can give the knowledgeable heavy metal/heavy rock community a slice of top-quality British rock. No stone has been left unturned in the recording of this album, we are immensely proud of it.

The Wraith
The heaviest metal available today! It‘s about the signs and portents of bad things that are about to happen; it‘s especially about a certain shared experience of Adrian and Simon.

Betrayed
Time to rock! Air guitars at the ready! This song is about—ah, you guessed it! And another shared experience to boot.

Circumstances Change
A beautiful song written by Simon, about a certain time in his life.

Win Lose or Draw
Now, ladies and gentlemen, we‘re going back to a time when rock bands were proper rock bands, and all rock tracks sounded as good as this… Whatever life throws at you – deal with it!

Souls of Evermore
At a fundamental level, a comment on the way we always remember the faces of people who have affected our lives – for good or for bad. It‘s a contemporary rocking track – more power than the National Grid!

Blind
Get your tissues out… Sometimes we get things wrong, but the power is always within us to change – if we want to, that is.

Sentinel
This is a monumental British rocker, and a comment about the young Thai boys who got trapped in a cave with their teacher which was big news at the time of writing the song.

Censored
More British no-nonsense rocking! A comment on yet another shared experience of Adrian and Simon.

Victorious
Slap bang into the modern day again. Try not singing along to the chorus if you can. The song is about the sweet smell of victory…And you‘ve guessed it, another shared experience.

Queen Serene
A tearjerker: we are pretty good at tearjerkers! It‘s a love song at face value, but actually an appreciative comment for those rare people in relationships who don‘t make life one long drama.