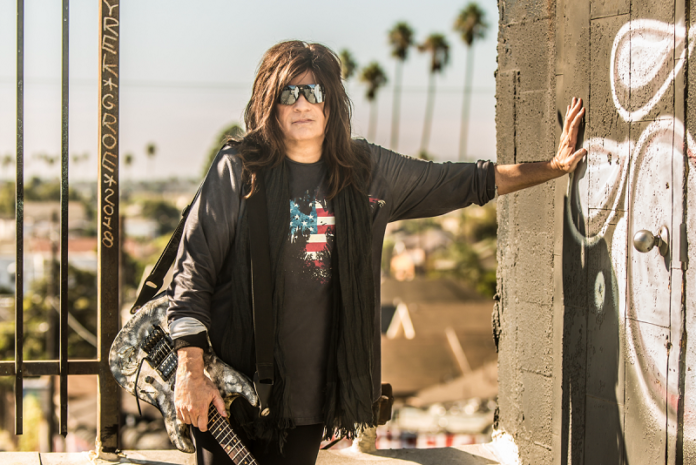 Frontiers Music Srl is pleased to announce the signing of the legendary AOR singer/songwriter/guitarist/producer Paul Sabu to the label for the release of ‘Banshee’, his new album as Sabu. Made in collaboration with Barry Sparks (ex-Yngwie Malmsteen, Michael Schenker Group, UFO, Dokken, Ted Nugent), fans familiar with Sabu’s oeuvre will find that it has a vibe redolent of his acclaimed ’80s work as Only Child. Out on 9th December, a first single and video from the album for the song ‘Kandi’ is available from today.

The son of the India-born film star Sabu, Paul Sabu’s big break came at the age of 22 when he became Motown Records’ official ‘Rock Dude’, releasing the classic self-titled Kidd Glove album in 1984. He reformed his own band, Sabu, the following year to release the ‘Heartbreak’ album, a record that included the hit single ‘Angeline’ and helped him realise his additional talents as a producer and mixing engineer. He then formed a new band, Only Child, which had huge success with a self-titled album in 1988. It is considered by many as one of the top AOR albums of all time.

Only Child later reverted back to the Sabu moniker, releasing much heavier and tougher music and finding new legions of fans with a self-titled 1996 album, followed by ‘Between The Light’ two years later. Together with ‘Strange Messiah’ (2007) and ‘Bangkok Rules’ (2012), these albums have a big sound with plenty of depth. Featuring blistering guitars and superlative vocals, they demonstrate just why Sabu is considered an AOR god.

Sabu has also been a go-to producer and engineer for artists as diverse as David Bowie, Alice Cooper, Sheena Easton, Lee Aaron, Madonna, Robbie Neville, The Nelsons, Shania Twain, John Waite and many more. This has earned him numerous Platinum and Gold Records in the US alone.

He has also been active in the world of music for film and TV series, with credits that include Baywatch, Beverly Hill 90210, Sex And The City and To Die For.