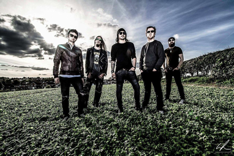 British five piece Ryders Creedare thrilled to announce the release of their new single “Raise The Hoof”, taken from their eponymous album released earlier this year via Off Yer Rocka Recordings.

Dedicated to the spiced rum Cloven Hoof, Ryders Creed’s second single “Raise The Hoof” is a well crafted rock track, with a catchy riff and a chorus that will have you bouncing up and down, wishing you had a shot of Cloven Hoof to raise! Once again, Ryders Creed are showcasing their ability to create a solid, energy filled and skilfully written rock song.

Guitarist Lee Spencer says: “Raise The Hoof is a track we are really excited about, we had a lot of fun writing it and even more fun making the video…. Lots of Cloven Hoof was involved in the process… It’s dedicated to Paul ‘The Cloven One’ Stanley and his Devilish brew ‘Cloven Hoof’ – when we first tried that stuff we knew we had to write a hard hitting rock song about drinking this stuff and what it’ll do to you. It’ll blow your mind. So come on and raise the HOOF! The Devil made us do it!!”

To corroborate the release of their debut album, Ryders Creed will be incredibly busy on the road throughout the whole of 2018, and just added 8 new show dates across the UK.

Tickets will be available via usual outlets.

Ryders Creed’s self-titled debut album is out now, via Off Yer Rocka Recordings.