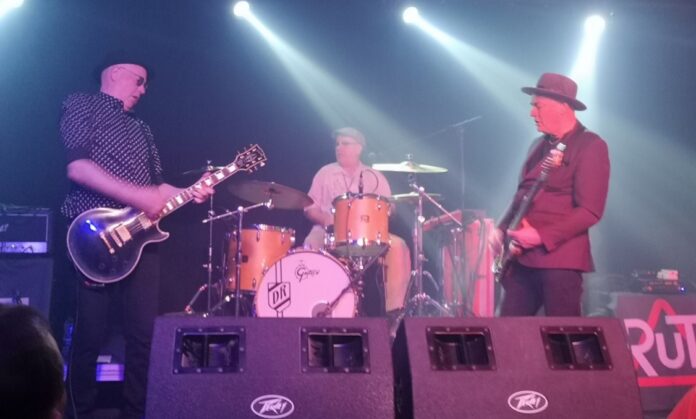 First up tonight are midlands based old style punk band Year Zero. As far as I understand this is their first time out since the departure of drummer Tim Johnson with new drummer also called Tim. They showcase tracks from their forthcoming album and kick off their set with ‘Ruin My Town’ with its rocking tom beat and chugging rhythm, steady bass and great guitar lines, a story many of us can probably relate to

Next up is the excellent ‘Heart Shaped Bullets’ from their 2019 EP, with eerie opening, banging chorus and great lead solo (Great TShirt by the way). This is followed by Micky crooning the opening to ‘Details’ which as it progresses reminds me of early Chelsea.

They sing about their own life experiences in ‘Tricky Micky’ (about the singer himself) and ‘Secret Suburbia’ a wonderful slower tempo number about what goes on behind closed doors, which the Kinks would be proud of.

‘Nostalgia’ with its great opening and mid song drum attacks and singalong chorus probably sums up how many of us in the room feel about music. They move through their catchy album tracks with ease such as ‘Human Condition’, ‘No Thrills’, ‘Trauma Doll’ and ‘Midnight Picture Show’, a real bopper with authentic scary laughter, about watching Hammer Horror films as a kid.

They conclude their set with ‘Hand Grenade Heart’, which has an SLFesque feel, a great rendition of Cat Stevens ‘Matthew and Son’ and the stomping ‘Tonight’ which they take down and build in equal measure with a singalong chorus of ‘tonight is our time’ – a great ending to a great set.

I look forward to the album.

Ruts DC billed this as dipping their toe back in the water and to their credit, they chose smaller great venues such as this. Segs as ever, the dapper gent in a smart suit and black headwear cradles his worn bass, Dave Ruffy is in his casuals and his hat and Leigh Heggarty adopts a smart shirt and black brimmed hat.

You can tell after all this time without gigs people are still somewhat cautious especially at first. They begin with ‘Kill the Pain’ from the ‘Music Must Destroy’ album and put on a great show as always. Tracks such as ‘Back Biter’ are as good as ever and feel like old friends especially given the years I and my mates have followed the band.

It is difficult for people to remain static and distanced for long as the band play tracks from their albums old and new. S.U.S’ is delivered with the usual menace and ‘You’re Just and ‘It Was Cold’ have real intensity. West One (Shine On Me)’ about Malcolm Owen becoming lost in London’s West End, is a personal favourite and could never disappoint.

‘Dangerous Minds’ from Animal Now showcases how good that album actually was and they should probably play more from it. Segs introduces new song ‘Born Innocent’ stating this is a new one but don’t worry it’s a good one. And true to form this has an amazingly haunting riff and is a great mix of classic Ruts/Ruts DC reggae and rock.  The call to arms that is ‘Music Must Destroy’ is a real stomper and now a set regular with the crowd singing along to a band confident in their song-writing.

‘Mighty Soldier’ with its wonderful off beat rhythm and Jah War’ are tracks which define the bands class, Segs sublime bass, the drums complimenting the guitar with Ruffy cleverly triggering numerous sounds and horns without even breaking the beat. Segs connecting with the young black boy with the heart of aggression at the front of the stage is a nice touch.

A brilliant version of ‘Love in Vein’ complete with harmonica sounds is a great tribute to those lost to the band and others with Police and Thieves cleverly built in and is a significant moment.  Rousing versions of ‘In A Rut’ with Heggarty’s menacing guitar and ‘Babylon’s Burning’ with reggae-tinged bass line perfectly complimenting Ruffy’s hi-hat, and the instantly recognisable guitar riff cause the crowd to surge forward, with Leigh and Segs criss-crossing the stage.

The pounding beat, menacing riff and crazy crescendo of ‘Psychic Attack’ make for a great end to the set but the band or the crowd aren’t done yet. They end the encore with ‘Something That I Said’ which is a fitting tribute to Paul Fox as ‘Love in Vein‘ is to Malcolm Owen, they have never forgotten their friends or their roots and long may it continue.

This is a magnificent venue and has had some investment and as Dave Ruffy acknowledged we are lucky to have these venues especially given the difficulties the music industry and venues have faced over the last 18 months. The management were excellent and I wish them well.