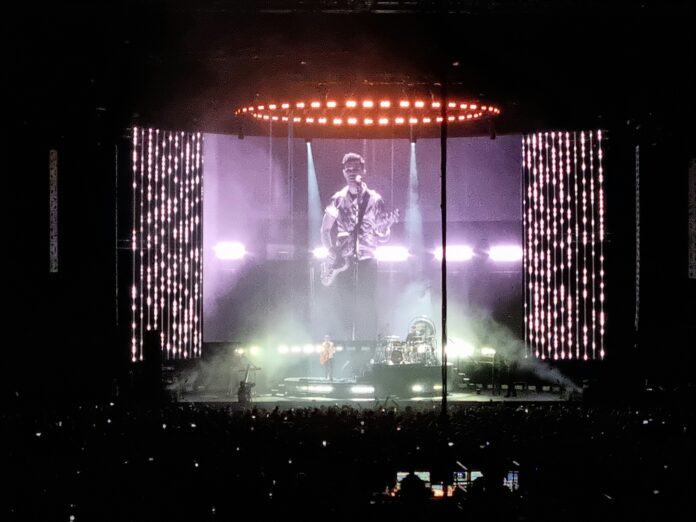 Back in November 2019 The Amazons played The Academy – a couple of thousand sized club venue a couple of miles across Birmingham from here. MV was there that night and wrote this at the start of our review: “Let’s get this said from the off. There’s no point in waiting for the conclusion. This is not a bombshell, just a fact. The Amazons are going to be huge. It is inescapable.” Fast forward two and a half years and there’s no change to that view. What you are looking at here is the next stars of guitar based rock n roll. Singer Matthew Thomson knows it too, although he points out that their first gig in the second city was “at the Sunflower Lounge, so this is amazing” (the Sunflower Lounge is a little wine bar where they put trendy little gigs downstairs), he knows – surely – that they are on the cusp of greatness. As “In My Mind” starts things off then they look born to be on this arena stage. New song “Bloodrush” is full of rock bombast too, and “Mother” from their last album “Future Doubt” is as ready to shake the foundations as it ever was. They’ve got confidence in their new material too, and “Ready For Anything” – a brand new tune that no-one has heard yet, belongs already. There probably isn’t anyone in the audience that wasn’t shocked by the death of Taylor Hawkins earlier on Saturday, and the cover of “My Hero” brings the house down. For all the emotion, though the overriding feel is of positivity and as “Black Magic” fades away, there’s only one conclusion: The Amazons are going to be huge. It might have been said before?

To fill an arena once is an achievement. To do it twice. Four and a half years apart? That makes you a serious big deal.

2017 it was, since we all gathered in here for Royal Blood’s first arena tour. Maybe they weren’t sure whether it would last at that point, maybe we weren’t – after all, they are, on the face of it a rather odd arena rock band.

But here’s the thing: Royal Blood are firmly in the Premier League.

Mike Kerr, the bass playing front man who plays bass guitar like no one on earth, surveys the crowd after “Lights Out” and there’s an air of incredulity about him as he says: “and people tell you rock n roll is dead, eh?”

There is, however, something kind of gratifying about it being Royal Blood that did this. Two piece bands are always odd. Ones that have no guitarist are, to be honest, even odder. The type of band that seemed to belong supporting Turbowolf in a tiny room a couple of years before they hit the big time, but had way bigger ambitions.

So, then, it still feels a bit like they are the outsiders even with thousands in here, as “Typhoons” starts up. One of  six from the “new” album that has been out getting on for a year, it like all the others, has fitted in superbly despite its darker tones.

Indeed, they are confident enough with the new material to do “Boilermaker” afterwards, but they understand the appeal of their brilliant debut record. And “Come On Over” is the first of most of it.

If you closed your eyes and just listened to the music, and immersed yourself in the structure of the show, then actually, Royal Blood are not a lot different to any other arena rock band. They absolutely thunder their way through “Hook Line And Sinker”, and the drum solo that Ben Thatcher plays after “Little Monster” shows him to be amongst the elite (it is accompanied with a picture of Thatcher and Taylor Hawkins on the big screen too).

There’s even the well paced sprint to the end that all arena gigs need. Darren James’ keyboards add a little texture to “Million To One”, “Limbo” and “Loose Change” pass by in a riot of sound and fury, and “Figure It Out” (arguably still their stand out moment) serves as your reminder that the only way to get to this level is to write songs that connect with people on a massive scale. This one has, for sure.

The encore starts with Kerr on piano for the poignant “All We Have Is Now”, but is soon back with all the hedonism of “Ten Tonne Skeleton” and when they do “Out Of The Black”, Thatcher leaves his kit to meet his people, before returning for an ending every bit as raucous as “Paradise City” would be.

Royal Blood, are, on pretty much every level, astonishing. And if always there’s the question of “how do they do it?!” about them, its time to forget it and just be glad they do.