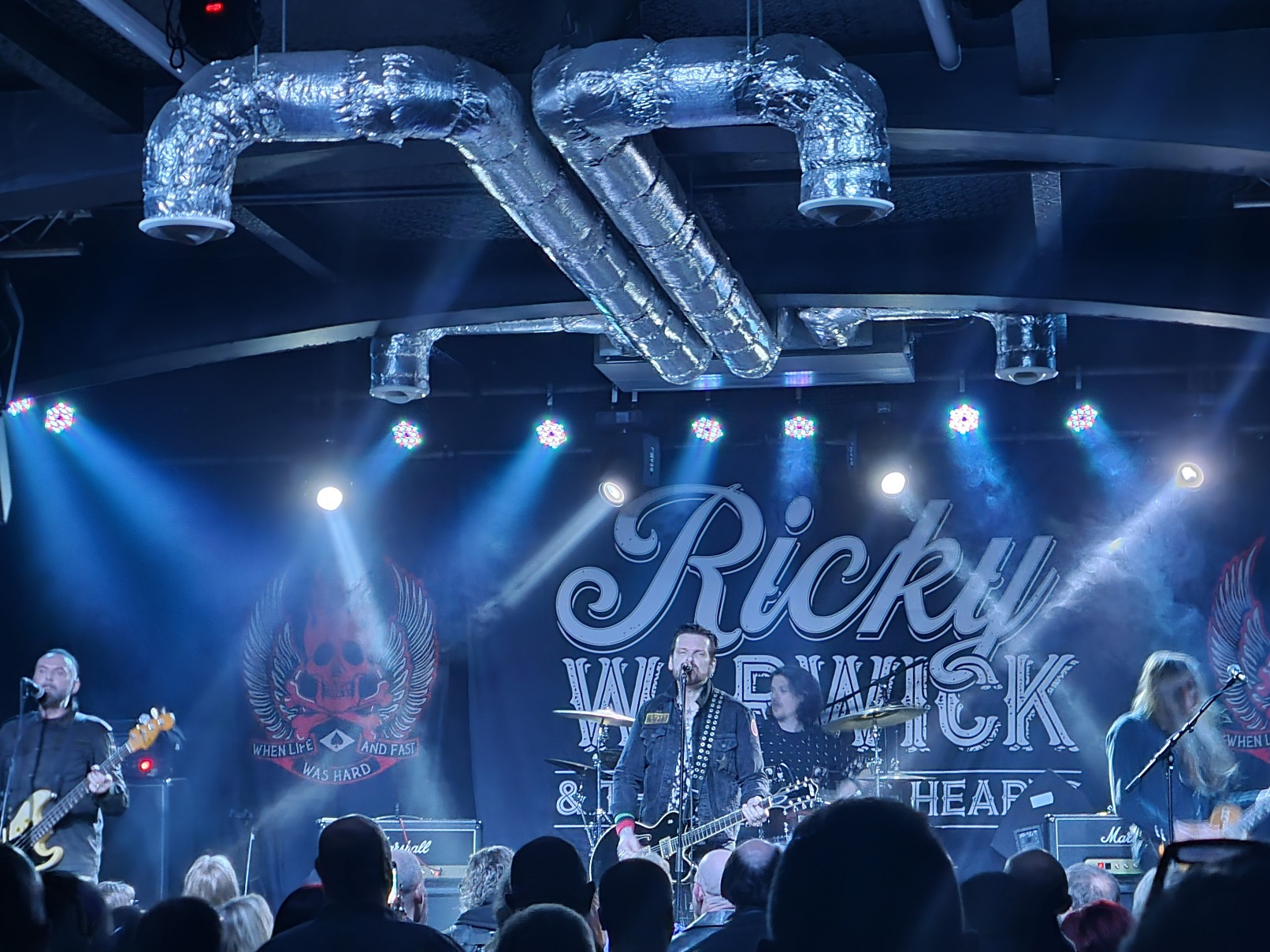 You have to say it’s bad luck when your drummer goes down with Covid on the eve of three of the biggest shows you’ve ever played to date, but its how you adapt, I guess. So Kira Mac just got on with it and worked some songs acoustically. Now, they are amongst friends anyway with this member of the MV team given that Kira Mac’s eponymous singer reckons she “hates The Beatles” before they play “Imagine What We Could Have Been” (I thought I was the only one….) but even allowing for the huge amount of bonus points that gets, there’s one other thing you can’t escape and that’s Mac’s voice. She is superb on “Never Gonna Stay” or “Hellfire Or Holy Water” (“a song I wrote for my dad, and if I ever end up in jail or rehab it’ll be his fault”) while the single “One Way Ticket” ends the show in style. The format of the gig – in all honesty – probably isn’t the best way to judge them, but you imagine that their first ever headline tour this autumn might be something to see. Not for nothing did Steelhouse Festival create a spot for them this year – and there’s enough here, even in this stripped down form, to show why. The big shows will keep coming, and hopefully they’ll be at full power when they do.

“Here’s one from the day job!” exclaims Ricky Warwick before he plays “Finest Hour” – the Black Star Riders song that has sort of wormed its way in to become a classic, these days.

As he does a thought strikes MV. There’ll be people here, in the place that Warwick describes as “my county” that are here because of his career in BSR. Which is why (as I noted In my review of his gig two months back, so forgive me for repeating myself) the choice of Eminem’s “Lose Yourself” as intro music here is so clever.

“You only get one chance” says Marshall Mathers. Not true. Here’s the man who got a second twenty years ago and intends to squeeze every last drop out of it.

That sort of joyfulness is all over this show. Ricky Warwick is playing on stage because he absolutely loves playing on stage and over his 30 odd years on planet rock in whatever guise, he’s as good as it gets.

The set is broadly the same as the gigs in the early spring “Gunslinger” still starts it, but there’s a change next to him as Sam Wood of Wayward Sons has taken over on guitar. He does – it has to be said – have a touch of the young Scott Gorham’s about him when they do “The Boys Are Back In Town” (which has subbed for “Jailbreak” this time) and is an inspired choice.

I’ve never hidden my love for Warwick in general and his band The Almighty in particular. They are a favourite band for me, and hearing “Over The Edge” or “Wrench” from their superb “Powertrippin’” record will always be a treat and the latter will always get blokes of a certain age with their fists up in the air screaming “you gotta rise to the occasion” at the appropriate point.

Then there’s the often overlooked solo stuff. “Road To Damascus Street”, “When Patsy Cline Was Crazy (And Guy Mitchell Sang The Blues)” are fine examples of just how good that is, and “Never Corner A Rat” or “When Life Was Hard And Fast” underline that his “new old”, as he puts its, record was an absolute belter too. Indeed, later in the set he plays “Tattoos And Alibis”, the title track from his “comeback” record. Now two decades old, it proves just what was missing when Warwick had his spell out of music, before being convinced to return by Joe Elliott.

“Jonestown Mind” (arguably my favourite song of all time, I will not deny that) begins a hurtle for the finish, almost, but its one that includes a wonderful version of “Jesus Loves You (But I Don’t)”, dusted off here for the second time in 20 years (the first being Thursday night in Dover) and I am willing to bet that I will be the only person in this room that has ever quoted its lyrics in an academic essay…..

As ever with Warwick there’s no encore. Instead “Iron Fist” is for Lemmy, “Free N Easy” is for the 15 year old kid who was sitting on his grandads settee one Saturday morning in 1991 watching The Chart Show, realising he’d just heard something that was going to change his musical taste (that’d be me, to clear up any lingering doubt).

At the end of this one Warwick mouth’s the words “…Free World” to bass player Richard Vernon and that one is played too. The clichéd ending to the review “and that’s what Warwick was born to do” or something equally facile, shouldn’t really apply, but that said, just like that gig in Wolverhampton back in March, that’s the overwhelming feeling.

A man with supreme talent, a wonderful stage craft, and with a desire – no, make that a need – to entertain, Ricky Warwick proved here, yet again, why some of us have held him in such esteem for so long.

It’s been twenty years since he returned, and it feels like a two decade long victory lap at this point.