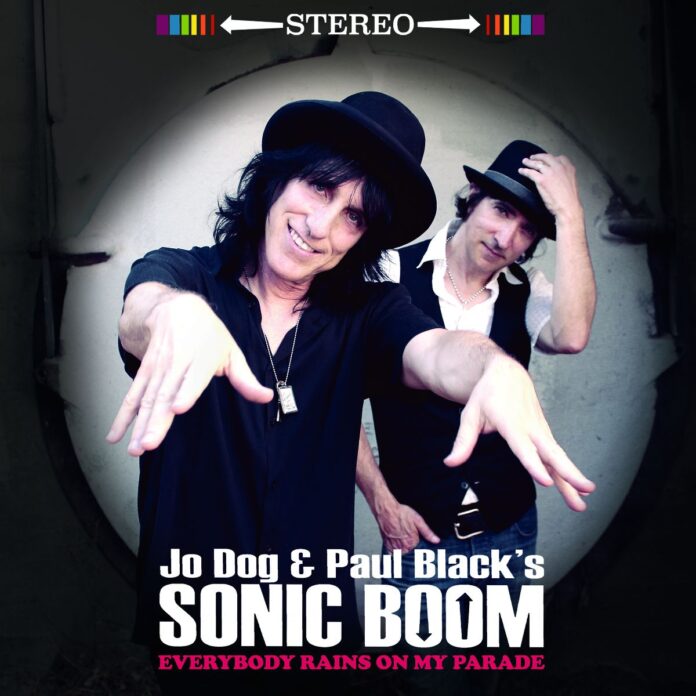 Not the opening line for most rock n roll albums, it has to be said, but it’s one that seems to fit “Everybody Rains On My Parade”.

Relaxed, welcoming, warm. All three are words that could be applied to this record, not just the opening “Put On The Kettle”, which acts as the intro here and sees Black adopt a quasi-Bob Dylan voice.

That gives way to the first song “proper” if you will, a wonderfully sleepy “Tree For Shade”, built around a woozy Stones-esque (think “Sticky Fingers” or “Exile On Main St” guitar lick, understated organ and lovely harmonies. It’s one of those songs that sneaks up on you, almost and which you find yourself singing without realising it. It’s indicative of the collection as a whole, indeed, I’d go so far as to say that if you don’t like it then you should look somewhere else for your kicks as this isn’t the record for you.

Now, the elephant in the room. This isn’t just a super album, this is a Supergroup. Jo Dog gets bonus points for being in Dog’s D’Amour the band that – along with The Quireboys – opened my ears to The Faces and The Stones (as well as having “The Graveyard Of Empty Bottles” EP which was the first time I ever listened to acoustic music and probably started my love of Americana and Folk). Then there’s Paul Black. In the tortured history of LA Guns it’s tough to pin down anything with certainty, but I think he was their third singer (the one after Axl and the one before Phil Lewis) and he wrote “Sex Action” and “One More Reason”, he’d gone by the time I saw them live in 1991, but deserves accolades nonetheless.

The reason for all that is to underline the fact the pair are lifers who know what they’re doing and there’s a class, an experience and a craft here throughout “Everybody Rains On My Parade” that rather suggests decades at the frontline, if you like.

Certainly, the glam flavours of “Up For The Late Show” or the more country stuff such as “Blue Like The Morning” are best described as “timeless”. That is to say, not dated in any way, but rather they could have emerged at any point in rock n roll and sounded just as good.

“Help me find my halo” says Black here. It’s noteworthy that he doesn’t sing as such, rather he confesses these words, and even on the more upbeat “You’re Home” (it’d be easy to imagine The Stray Cats doing this one) he almost takes a support role to the backing vocals.

There are some genuinely brilliant moments here. Perhaps the best is “High Price To Lead A Low Life”, a slow burner with a definite nod and wink to “Midnight Rambler” as it builds and comes back for an encore almost, while “Dead In The Water” with its bar room piano and liberal percussion will be a highlight if this ever gets to the stage.

When you review these type of records, its easy to use easy signposts like “loose-limbed”. The type of thing that no one really understands, but everyone knows what they mean, and the title track is one of those. Just such an easy listen, kind of floating by with its Kinks t-shirt on and even the more strident ones like “Sugar Mama” seem to be the soundtrack to a 1960s film that was playing in Black and Dog’s heads.

Scanning the tracklist I’d assumed that “Mi Vida Loca” would be a Spanish thing, and it doesn’t disappoint, like a warm zephyr blowing in off the Mediterranean it relaxes by the pool, before there’s a more earthy, gospel thing going on in “Jesus Drives A Schoolbus” which pulls of a neat trick of sounding epic even though it does it’s stuff in four minutes. The battle between good and evil is laid out further in “With Regards From Hell”, which ends things in the same gentle fashion that most of “Everybody Rains On My Parade” seems to exist in.

An album that is good when you first hear it (class after all is permanent) but goodness me, when you peel away its layers, it reveals something glorious. Less a Sonic Boom than a series of lovely little explosions.