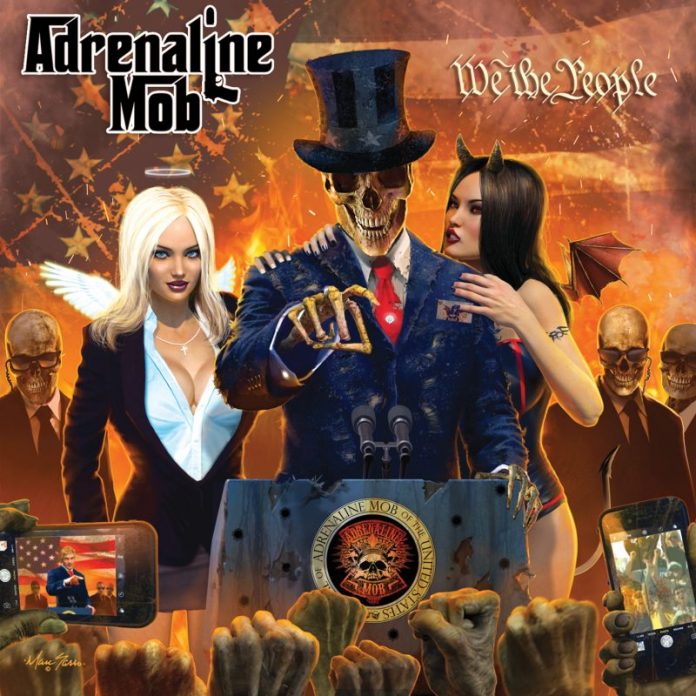 It’s still we the people, right?

Considering they are only five years into their history, Adrenaline Mob have packed plenty – good and bad – into the story.

From the brilliant debut album (which saw Mike Portnoy on drums) the excellent second album and the superb covers EP, the music has been magnificent.

Things have been a little more upsetting away from the stage, though and the accident they suffered while on tour with Avenged Sevenfold and Hell Yeah, was followed by the worst news of all. The death of drummer AJ Pero.

After this founding members Russell Allen and Mike Orlando went away to clear their minds (Allen is the singer-cum-force of nature in Symphony X) and it seemed that the Mob might be disbanded.

But then? Well, then came a text message from Allen to Orlando which said: “its time, isn’t it?” With that “We The People” was born.

And anyone who expected a more demur, maybe introspective, Adrenaline Mob given all they’ve been through (there’s also been a change of bass player with David Zablidowsky taking over) would be mistaken, because while they’ve also been on the more testosterone fuelled end of the hard rock spectrum, now Adrenaline Mob sound like they’re auditioning for some edition of World’s Strongest Man.

Now, it seems even the testosterone is injected with steroids, but this tactic works as it suits Allen’s full-throated roar and the huge arena bothering riffs of Orlando perfectly. As a welcome back after three years “King Of The Ring” is perfect. Crashing in with a hint of violence (when Allen sneers “keep running your mouth” you best believe he sounds like he means it), it is followed by “We The People” which is like Allen’s day job gone hard rock, while “The Killer Inside” is a grim trawl through the mind of a serial killer, which they pull off with some rare aplomb.

One of those records where even the ballads want to flex their muscles, “Bleeding Hands” just about restrains itself even though you know it doesn’t want to, “Blind Leading The Blind” is an excoriation of those who think they know better, and even when it does do a mid-paced chug, it does it on “Chasing Dragons” about a descent into heroin addiction.

New drummer Jordan Cannata does a wonderful job on the sticks, and ensures the thumping, crushing, driving nature of what they do remains in place throughout, even on what we might call the “deep cuts” of “Till The Head Explodes” and “What You’re Made Of” – which are shot through with both a class and clenched fist.

“Raise ‘Em Up comes with a touch of Volbeat about its chorus, “Ignorance And Greed” is one of the heaviest things on the album, with an almost thrash feel, while there is such a groove about “Violent State Of Mind” that it seems like it wants to take on all comers.

A lengthy collection (certainly in today’s Spotify led world) ends with the genuinely epic sounding left turn that is “Lords Of Thunder” which has an intro belonging to Game Of Thrones, before casting off the shackles and coming out swinging one last time, and anyone who wonders why Symphony X are so good, should listen to Allen’s vocals here.

There’s a bonus track too and on “Rebel Yell” they manage to make Billy Idol’s “Rebel Yell” look like it should have always been full of chest beating fury.

“We The People” is a mighty thing and that is true in all senses of the word. Rock n roll with strong arm tactics as one of the finest rock bands flex their considerable muscles. Arena’s await, as no one could really go 12 rounds with Adrenaline Mob in a championship fight.