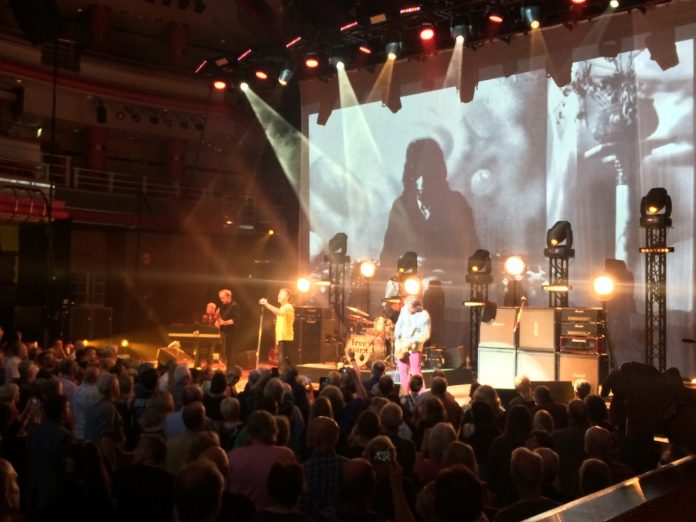 Everything is free and easy

Recently, MV saw King King – the Scottish blues rock band that we love so much. Halfway through their set that night, their singer Alan Nimmo played a cover by the band he said “made me want to play music.” The song that followed was “Heavy Load” by Free. Others too, not least Joe Bonamassa, have spoken of their debt to the music that was created all those years ago.

Which is exactly why there was such excitement when it was announced that Paul Rodgers was heading back onto the road to play songs from the Free back catalogue for the first time in a very long time indeed.

Anyone who saw Rodgers last year on the Bad Company tour knows he had very much still got that ability to sing that saw him dubbed “The Voice” and for this tour the assembled cast includes Pete Bullick on guitar, Ian Rowley on bass, Rich Newman on drums and Gerard Louis “G” on keyboards.

As befits a show like this, there is a celebratory air from the off, “Little Bit Of Love” is perhaps a little more poignant than usual given recent events, “Ride On A Pony” shows the depth of material that Free had, and the jamming on “Be My Friend” is a chance for the band to show their superb skills – Bullick in particular is in incredible form.

A neat mix of the hits and the ones they wanted to play is nowhere better evidenced than the pairing of the crowd pleasing “My Brother Jake” and “Love You So” which the band never played live back in the 70s.

A shortish set – the whole thing is over in under 80 minutes – is nonetheless packed full as it hurtles towards the end. “Mr Big” is a real highlight, “The Stealer” likewise and “Fire And Water” is quite simply brilliant.

The set ends with “The Hunter” – on their “Ton Of Sobs” album but originally an Albert King song – but there’s time for two encores.

The first one has the ones you’d want. “All Right Now” and “Wishing Well” remain two of the finest songs ever written and are as gleefully received as you might expect (and the singalong of the line “love in a peaceful world” is particularly rousing). There is a clever use of vintage photos on the big screen while they play too.

After this it is testament to the quality of  both “Walk In My Shadow” – which is turned into a bar room classic with the harmonica and piano work – and “Catch A Train” that it never feels like a case of after the Lord Mayor’s Show.

The whole evening fittingly and lovingly showcases the skill and unique songs of one of Britain’s finest bands. It is 50 years since Paul Rodgers met Paul Kossoff and the legacy was begun. Tonight proved – if you will forgive the cliché – that while these songs exist, then music is still all right (even) now.