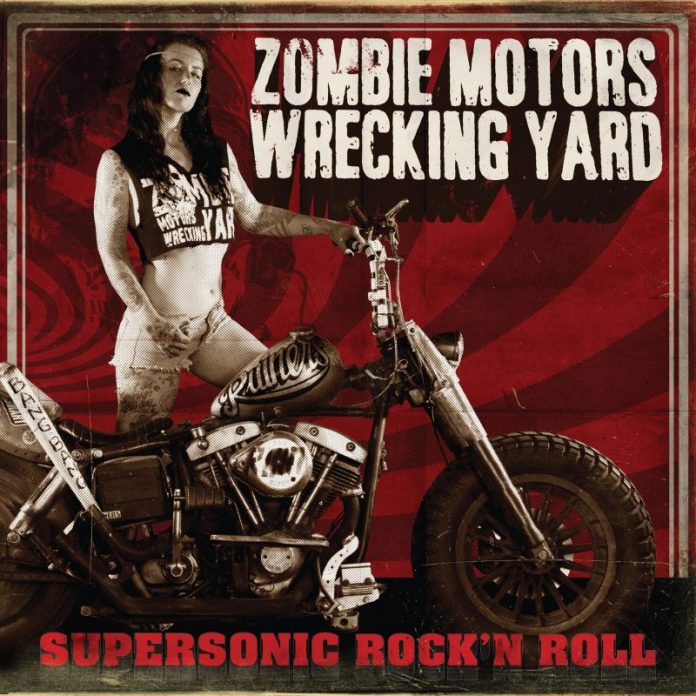 Brilliant greasy filth from the land down under

It’s great that even in the modern world that five blokes from the State of Victoria in Australia can call themselves Zombie Motors Wrecking Yard, call their album “Supersonic N Roll”, have a front cover of a girl on a motorbike – and make the damn thing sound exactly how you wanted to?

ZMWY (perhaps the most rock n roll band name ever?) are what would happen if Rob Zombie had fronted Motorhead, and decided to add a stoner element to Lemmy’s sound.

Exhibit A: the first track, “Grind The Grinder” first of all gives Jesus and Satan an intro that has so much swearing in it would make a Docker blush, then asks the women in the room to “take their knickers off ready for me” and has mention of “gloryholes” in – all in just over four minutes.

Exhibit B: “Love For Speed” – the kind of downright filth that sleaze rock bands the world over would kill their grandma for. It’s first line? “we’re dirty rock n roll outlaws”. It’s chorus? “My baby got drugs for me. Give me, give me, give me love for speed” might not strike a chord with those who think music has to be earnest and change the world.

Those of us who think its about fun, on the other hand, will e dancing round loons and turning this up to 11.

Rather like compatriots, label mates and you’d guess brothers in arms, Mammoth Mammoth, Zombie Motors Wrecking Yard do have a little more subtlety than you might imagine, “Dead Smile” comes with its big dick swinging, before doing something kinda space rock, “Galactic Motherfucker” out White Zombie’s White Zombie and “Roll And Burn” adds a bluesy element that you were perhaps not expecting it to have.

Largely, though you feel ZMWY are happier with beers in hand and the threat of violence in the air and on “Fight Fight Fight” both of those things are there in abundance.

And yet, then they can pull something out of the clear blue sky that sounds like nothing else here. “Bad Boy Benny” picks something primal out of the blues, while “God Of No” throbs and pulses like Monster Magnet at their absolute rawest, and “Judas” is nothing more and nothing less than a crushing heavy in the classic mould.

Zombie Motors Wrecking Yard manage to do something remarkable. They are more rock n roll than their name suggests they might be. Think of it like this, this is so rock n roll that if the cast of Sons Of Anarchy were looking for something to get them really in the mood for a three day bender in the clubhouse, they’d make this the soundtrack and turn it way up loud.