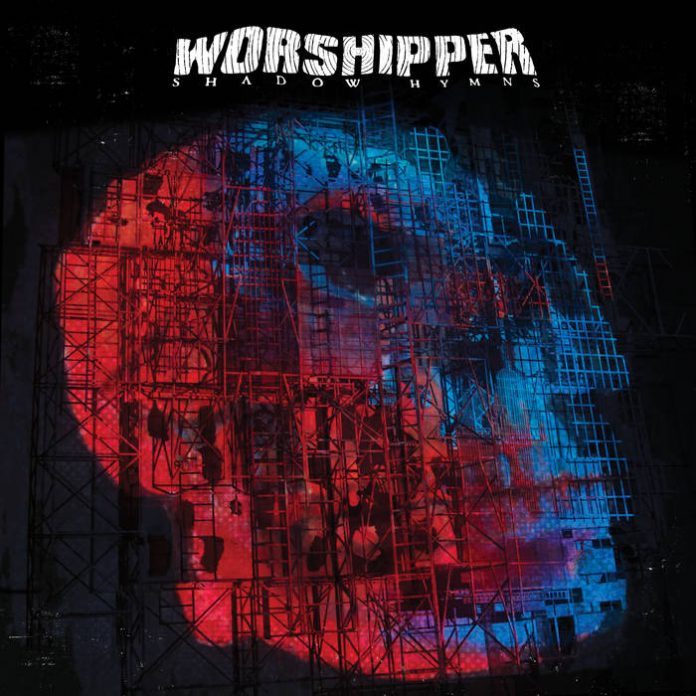 This might be their debut, but Worshipper have long been lets say, “hotly tipped”. Named as “Metal Artist of the Year” at the 2015 Boston Music Awards (they are from Massachusetts  and, most recently, being chosen over 23 other participating bands as champions of the 2016 “Rock and Roll Rumble”, a competition hailed as “The World Series of Boston Rock” that has taken place annually since 1979

No pressure then, huh?

All you can do at such times is get yourself into the studio – which they did with producers Benny Grotto (Aerosmith, Orange Goblin) and David Minehan (The Replacements) as it happens and make something worthy of the build-up.

And make no mistake, on “Shadow Hymns” they have done exactly that.

An eight track affair that stays absolutely true to the records that you’d imagine the four men that made it love, and their self-proclaimed debt to bands like Judas Priest and The Scorpions shines through, but it’s more than that. Those that enjoy the epic metal of Sorcerer, say, will find much to enjoy here as the dark, smoky, almost occult metal of tracks like the superb “Darkness” winds its way into first your conscious and second your nightmares.

This style has been evident since the start, which is why “Shadow Hymns” is better than the myriad NWOBHM obsessed chancers that heard “Piece Of Mind” and assume writing a song like Iron Maiden is as easy as that.

Instead Worshipper infuse things with a Sabbath-like ear for ghostly doom, so “High Above The Clouds” crushes methodically as well as finding the time for a massive old hook and riffs a-go-go, and if “Step Behind” does cheerfully have a gallop then by the time it does you like Worshipper so much you’ve got your horns up too.

The four piece are at their best though, when they are hinting at something evil lurking in the dark, “Ghosts And Breath” does this incredibly well, and there is a real sense of foreboding here. “Peace Beyond The Light” is another which cover its intentions, happy to lock itself into a groove, it seethes with something that’s not quite anger, not quite retro, but instead somewhere in between.

Frequently, you have no idea what on earth (or indeed what the hell might be more apt) John Brookhouse is singing about – but that said, there’s a real thought that it might be best to consider that either, as spooky “Another Yesterday” proves, while “Wolfsong” seems to be summoning up from the depths of God (or Satan) knows where.

Which is why Worshipper deserve so much praise, it would be so easy to get down the studded belt route taken by so many of their compatriots – instead they have teased something new out of the genre instead, while still clearly acknowledging the greats of the past.

It would too, have been easy for this record to outstay its welcome with lengthy songs, that it doesn’t do that is another feather in its cap, “Black Corridor” for example packs more into it’s four minutes than many would on an album.

If you don’t mind though, MV won’t take a peak any further down that particular hall as it seems a touch scary. What lurks in these shadows, though, is just fine.