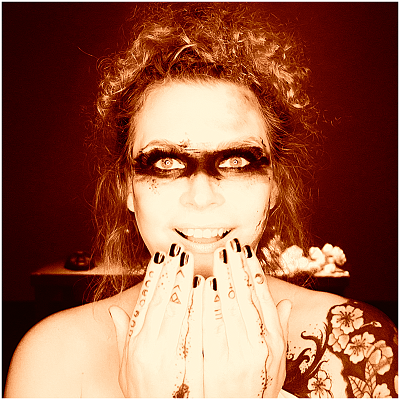 Witch Of The East are a Leeds-based creative collective who release `Savage Beauty`, their second album this month. The band were formed by Aeris Houlihan, vocalist and guitarist of now defunct Leeds duo Chambers along with Zera Tønin (Annasofie Moxon) of electro duo Arch Femmesis and Manny.  Chief songwriter and self-described trans activist Aeris Houlihan shares that much of the material on the album is focused on time spent serving in the army and ensuing struggles with PTSD, and her often traumatic experiences as a trans woman.

This release begins with `Ritual` which is really a brief passage of music, maybe a ceremonial piece to open the album on. An acoustic guitar and distantly shared vocals lead us into the quite folky `Red, Yellow and Black` before it takes a sort of curve ball midway through becoming slightly darker, hazier near enough psychedelic with a spoken word segment before ending with a further spoken section with a much deeper menacing almost demonic vocal.

`Comfort Me` is a number written about being in an isolated headspace. It had a dreamy rockier goth like texture that reminded me a little of Gene Loves Jezebel. Again, around the halfway mark it slows before resuming its previous pace with both Aeris and Zera`s vocals interspersing throughout. There`s a more mournful feel to `Fool`s Paradise` which to me could have slotted onto The Smashing Pumpkins `Mellon Collie And the Infinite Sadness` album if the lyrics weren`t so awash with profanities.

`Through A Thousand Doors` was a little erratic and enjoyed a variety of styles that seemed to be melded together in a kind of punk mashup. A noisy but captivating offering in which I thought I detected a slight middle eastern vibe along route as well. There was a quite gentle feel at the emergence of `Little Red` with its constant drum heartbeat, plucked acoustic guitar chords and dreamy vocal. It then veered off into an odd musical cacophony and blossomed into a strange hypnotic like state before zig zagging in a number of directions before concluding its journey.

`Something`s Wrong` returns to shared vocals on this entrancing and at times dreamlike piece which offered some lyrics in French towards the end, unless i`m mistaken. There`s a trippy out there sensibility to `Martini Glasses` which will have you drifting off to another dimension as this piece evolves.

`Just Enough` has that constant drum and cymbal beat at its heart and vocals that are distorted at times and sound as though they are channelled through a megaphone and will almost mesmerise you. The album closes out with `In The Dark` which probably sums up this number. it certainly had me struggling to grasp what it was about. It`s quite dreamlike initially then kind of bleeds a pounding drumbeat into the mix with unnerving laughter and lyrics delivered at speed. As this submission concludes we are offered the sentiment of “silence, mistrust, I am your consciousness”

Something to consider indeed.

Witch Of The East have been described as an outfit delivering music that is both visceral and sublime; their cinematic, genre-twisting potency flitting from anthemic alt rock to dark folk, through post-grunge and shoegaze, and even taking in elements of glam and acoustic balladry. This is a far better summation than I could prescribe, take a listen, and see if you agree.