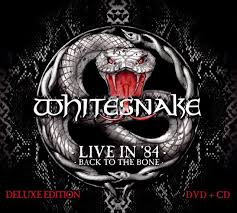 30 years ago Hard Rock was all the rage.  You couldn’t move for poodle-haired rockers strutting their stuff and being beamed into millions of homes via MTV. By the late 80’s it had completely taken over and the charts were full of hard rocking bands, usually showing off their sensitive side with a ballad or two.

The early 1990’s though was a very different matter as the sound of Seattle blew the hairspray back into the faces of the thousands of rock bands desperately trying to cling onto their status.

Whitesnake were always a slightly different proposition that the other bands, forming as they did back in the 1970’s with a distinct blues edge and flavour to their rock sound.  It was almost inevitable that they would be swept up in the over-polished sounds of the 1980’s.  That said it never stopped them making great music. “Back To The Bone” is testament to that.

The live album is taken from bootleg collections from the era, however, unlike the usual official bootlegs this is not taken from one show but from a few shows that took place in 1984 on the Slide It In tour.  Starting with Japan’s Super Rock festival.

The opener “Gambler” is a quick-fire rocker of the like that Coverdale has traditionally excelled in.  It opened the band’s sixth studio album, Slide It In,  and it’s the perfect way to start a rock show with its dramatic extended intro and balls to wall thrust.

This tour was the first to feature John Sykes on guitar and second track in you can hear his influence all over it.  “Guilty of Love” is the track and it’s Thin Lizzy in all but writing credit.  His time in the legendary Irish band certainly left its mark.

“Love Is A Stranger” starts as a power ballad of the kind that was all too familiar at the time.  However once the one minute mark kicks in  a full-on rocker appears and from there it’s all hard rockin’ sing-a-long heaven.

Coverdale’s famed on-stage banter makes him a come across as a rock n’ roll version of Frankie Howerd.  I’m not sure it was necessary to include it on the cd. It adds nothing and only gives Dave’s detractors more ammunition with which to shoot him down.

The slow burning blues groove of “Slow and Easy” is a change of pace and allows John Sykes his chance to shine with some superb guitar solo interplays.  It’s a strong track and demonstrates how tight the group were at the time with Mel Galley on guitar, for a while until a broken arm ended his tour, Jon Lord on keyboards, although he was also to leave prematurely, Cozy Powell on drums and Neil Murray on bass, perfectly backing the stylish Coverdale and Sykes pairing.

“Ere’s a song for ya!!” screams Coverdale as he introduces the brilliant “Walking In The Shadow Of the Blues”, a Bernie Marsden penned classic  taken from the equally excellent 1979 Lovehunter album, which the band notched up a few decibels.

Crowd favourite “Ready an’ Willing” follows before a Sykes guitar solo introduces “Crying In the Rain”.  Finishes of the Super Rock section is the two-minute lament “Soldier of Fortune” which showcases Coverdale’s pipes at their seductive best.

Three more live versions of “Love Ain’t No Stranger”, “Ready an’ Willing” and “Slow an’ Easy” follow.  They are not particularly essential but I suppose they do give another chance to hear an alternative show for those hardcore fans out there.

The final track is a 16 minute medley of Jon Lord’s final show with the band in Las Vegas which comprises of Gambler; Guilty of Love; Love Ain’t No Stranger and Ready an’ Willing.  Again it’s not necessary to include it but we are not going to argue.

Vocally Coverdale is in fine form and he has said that he considers this era one of his favourite in his storied career to date.  Listening to the tracks here it’s pretty hard to argue, despite the oddness of the assembling of the tracklist.  Not sure we really need three versions of the same song, no matter how good they are.  That said any Whitesnake is good Whitesnake.

A DVD is also included as part of the package if you require the ‘Snake in all it’s visual glory.  It contains a bonus gallery of unseen images and much more alongside the performances on the cd.