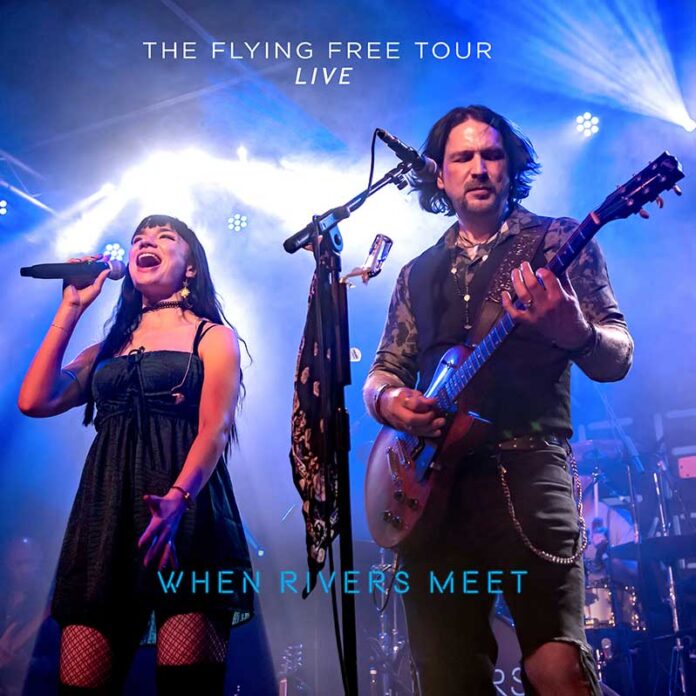 On 13th May 2022 I as in a kind of medium sized club venue on the edge of Birmingham City Centre. When Rivers Meet were playing there. I mean this in the nicest possible way: they’ll never play there again.

The place was rammed. If you’d bought a cat, there wasn’t room to swing it. And for an hour and a quarter or so, Grace and Aaron Bond, plus a few of the best session musicians around, played one of the most warm and happy gigs you’d ever see. There was more to it than Mr. And Mrs. Bond being glad to be out of the house and on stage, mind you (although that was part of it). No, rather, those songs of theirs you liked on record, came alive, live.

I wrote on the review of the proceedings that “When Rivers Meet are on top of their game.” On reflection, and listening to “The Flying Free Tour Live”, it occurs to me that I might have been wrong. They aren’t at the top of their game at all. They’re getting better.

Fast forward a couple of weeks, to the 27th May and they are in the Bodega in Nottingham. A venue where bands go when they are on the cusp, and they are playing “Did I Break The Law?” as if their lives depend on it.

That’s the opening track here and its raw, primal, and fun, all at once.

And that’s sort of what they do. “Walking On The Wire” and “My Babe Says That He Loves Me” does their other thing. It adds something ethereal. Grace, for all that she is the happiest woman on Planet Rock, has a mystical side, and it makes WRM different to their peers.

With Roger Innis and James Fox joining them, the supporting cast was as stellar as could be, and “Free Man” and the likes showed that perfectly, while “Lost And Found” is exactly the sort of thing I meant when I said the songs that were good on record were great here.

Oddly though (and this was the case when I saw them too) “Bury My Body” is one of the highlights. Just the two of them (Grace had joked they were paying the two session boys by the song) and it was/is stunning. Grace adding the violin to give a real folk touch.

Maybe that’s the band they were at the outset? The one they are, now is the arena rockers in waiting on the wonderful “I Want Your Love” (turned into a singalong in readiness surely?) or “Testify” – their absolute peak moment.

This is a band that’s not so much living the dream, as living their dreams. And that’s what makes it special. There’s a bit on the ballad, “Don’t Tell Me Goodbye” where Grace starts laughing, as if she can’t quite believe it. She makes it through to the end and the line about “Where has my happiness gone?” and then concludes “its right here.”

It is. It was. And it’s right here on this disc too. When Rivers Meet are going places. We’re all invited. They help us all fly.