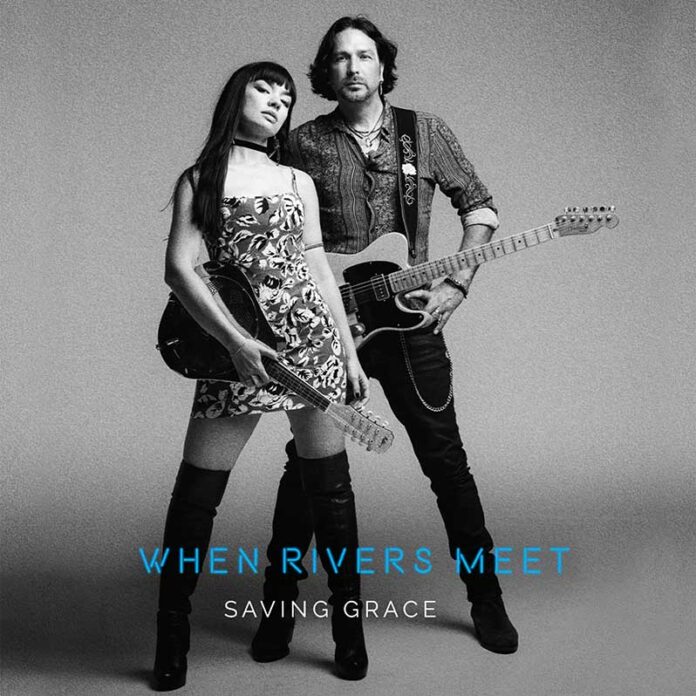 It’s interesting, because just from these words alone – if you didn’t know When Rivers Meet’s music – you could make all kinds of assumptions:  Grace Bond (lead vocals, mandolin, violin) and Aaron Bond (guitar, vocals).

A married duo, with that instrumentation is the type of thing you can see in folk clubs up and down the land every night of the week. You know the sort. The weather-beaten troubadours with battered old acoustics, and stories of the back roads.

What makes it even more interesting in the case of WRM is that’s what they were. Until that is in Grace’s words: “We were at a Guns N’ Roses concert and I’d had a couple of beers and we were watching Tyler Bryant & The Shakedown.” I remember that gig too, as I was there (at least I was if it was at The London Stadium on a Saturday night) and they are right on two counts. First, Bryant was sensational (as in fairness were GnR) and you can see how it influenced the pair. Secondly, they are right about something else too, given the astonishing power of Grace’s voice then that folk stuff. Nah, not for them.

Rather on their second album in the space of a year, they (along with producer Adam Bowers who plays drums and bass for them too) have tapped into that thing that makes all duo’s so thrilling, that is to say “Saving Grace” has an innate rawness.

“I Can’t Fight This Feeling” has a touch of Led Zeppelin in its blues, but also the idea of a lack of polish. It’s their in “Never Coming Home” too (it’s actually present in all of them) and the glorious slide guitar sound.

This is more than a sonic feeling, though, When Rivers Meet can write a groove and a chorus to match Bryant – or The Picturebooks, a band there’s a kinship with. And this is a more multi layered attack than you first realise. Check out the organ touches, or the embellishments here and there and you can only come to the conclusion that this is a band doing things with an originality  and on their own terms.

“He’ll Drive You Crazy” – one of the highlights that “….Grace” has to offer – features a Cigar Box guitar, and at their heart, I suppose When Rivers Meet are a blues band, but they are a tough one to pin down. When they duet, notably on “Don’t Tell Me Goodbye” there’s a country flavour. Aaron in particular sounds like a itinerant road dog here, but then there’s a simple hard rock feel to “Do You Remember My Name” – it’d be tough to forget at this point – and the riffs are more strident than simple “blues”.

Then there’s a little bit of soul and melody on “Have No Doubt About It” – the suggestion that it floats along with the violin to the fore – that recalls the fabulous Purson more than anything else.

“Eye Of A Hurricane (Friend Of Mine Part 2” offers up something that lurks in the swamps – and is the second half of a track on their debut, as if to suggest how much thought has gone into the work. Aaron’s vocals here are more Nick Cave too, and it’s a thrilling diversion.

“Testify” was the single for a reason. It is an immediately superb song. One or two of them need a listen or two to appreciate, not here. This one has a relentless energy. “Shoot The Breeze” is equally compelling, but for different reasons. It is slower, more deliberate, almost hypnotic in its groove.

Being a fan of slide guitar, its tough not to love this band, frankly. They drench “Run For Your Life” in it (and like “Testify” you imagine this has been constructed with an eye on playing it live), but “Saving Grace” is full of diversions (and diversity). “Talking In My Sleep” might well be a left over from the acoustic days and the duet here shows that if they’d gone down the folk route they’d have been quite the force there too.

There’s something, however, that says they’ve made the right decision when you listen to them do “Make A Grown Man Cry” and something too that says that for all this sounds unhinged and raw, then the three (Bowers to all intents and purposes seems like their de facto third member) then it’s absolutely in control of what it wants to do – right down to the abrupt ending.

It’s been the case with all When Rivers Meet releases that they’ve got better and better each time, “Saving Grace” is no different, and showcases an original take on an old formula and a band with plenty to say.