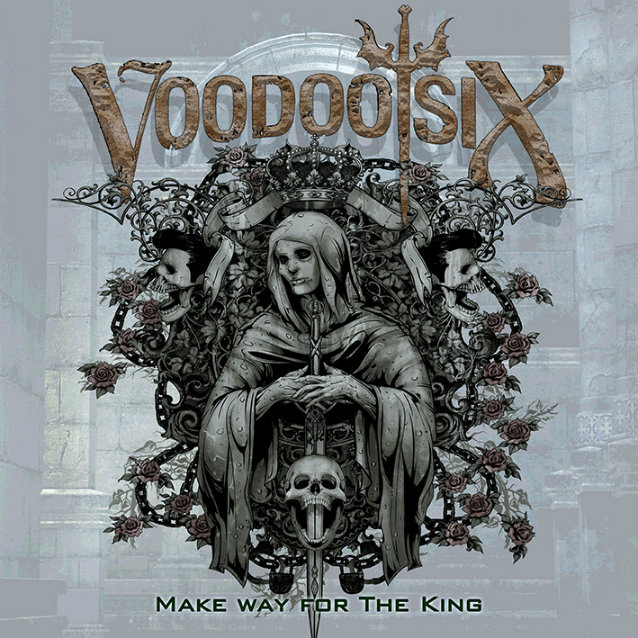 Even the press release that came with this album acknowledged that Voodoo Six haven’t had it easy over the years. “There may have been some bumps along the way,” it said. You can say that again.

Whatever else has changed – and on this album, long-standing vocalist Luke Purdie has been replaced by former Voodoo Johnson man Nik Taylor-Stoakes – there has been one constant with VS: the quality of their music.

Forming in 2003, with a core of Tony Newton (and we might as well get it out of the way, because you kind of have to, Newton is Iron Maiden’s sound man. And while we’re on the subject their drummer Joe Lazurus is a relative of Iron Maiden’s Fan Club Co-ordinator) and Richie Faulkner, now in Judas Priest), everything seemed set for a major breakthrough with the brilliant “Fluke?” album which emerged at the start of the decade. Momentum stalled a little with 2013’s “Music To Invade Countries To” – which deserved better, but now they are back. And the four-year break has clearly left them feeling newly invigorated.

“Make Way For The King” is not a short, frothy, or indeed fun piece of work. It is a record of well over an hour, some dark themes and with an epic sound. But then, these are not the easiest times to live in and the collection reflects that.

It does, though, possess the same arena bothering sound that the band always did at their best. There was a reason they kept getting plumb support slots, and that was because sonically that’s where Voodoo Six belonged.

“Electric” – the album’s strident opener – comes from the same school as the bands classic “Take Aim”. It broods, but you just know that it is going to open itself up in widescreen. Like Pearl Jam at their heavy best, it rather defies classification too. Hard rock, but with grunge overtones and yet happy to play blues influenced leads, it really does show why so many of us got so excited about them ten years or so back.

In many respects, the title track is more of the same. Guitarists Matt Pearce and Craig Price excel themselves throughout, here there is a Jerry Cantrell touch to the riffing, but the hook is pure fists in the air, as Taylor-Stoakes really announces himself.

There is a little more of a gritty groove about “Walk On” as Newton – who also produces this and co-writes all the songs – brings his bass to the fore, and if you could possibly level the point at the album that it is a little one paced, then that isn’t the case with “Falling Apart” which has more of a slam and a genuinely catchy pre-chorus.

Mostly, though “….King” concerns itself with bleak sounding affairs. “Riot” is a huge sounding thing. “Amen”, which follows it,  seems to be the album’s centre point. Right in the middle of the songs it is the longest and with epic intent. “If we were all atheists, would there be this war?” comes the plaintive question in its first verse.

“Until The End” adds a dirtier edge to its riffery – sounding not unlike Stone Temple Pilots as it does its work – and there’s a kind of Sabbath flourish about “Release The Hounds” which proves that although they do it subtly there is plenty of light amongst the shade.

Although VS don’t particularly deal in ballads, “The Choking” is as close as it gets, but even with the orchestration there is a claustrophobic feel here to match the lyrics. This is juxtaposed nicely by the more airy feel to “Walk A Mile” and the almost funky overtones to the start of “Wasteland”.

As “Swept Aside” brings things to a close with the thought “God’s forsaken so many things”, there is a real feel that if not quite starting again, this refreshed line-up is going to give it a real go. They’ve always had the talent, they’ve got the songs and with “Make Way For The King” they’ve made a real statement of intent.