REVIEW: VOODOO SEX CULT – A Year And A Day 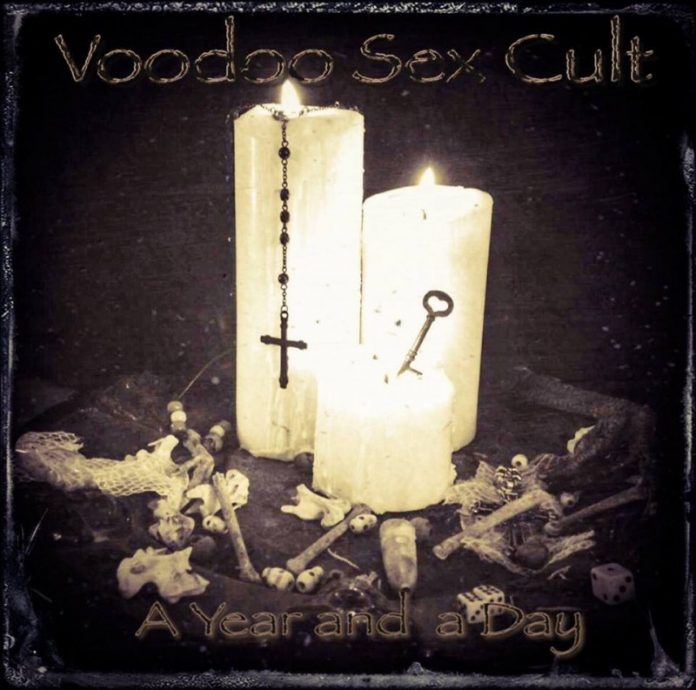 The voodoo is cutting loose – not quite as you’d expect

It’s not every day that an email arrives at MV Towers that urges you to check out the new album from a band called Voodoo Sex Cult for review. Now, frankly, MV isn’t the type to consider Voodoo sex cults (such things make us blush……) but ….ahem….curiosity gets the better of a person,right?

The truth about VSC is even….ahem (again!) harder to fathom. But here’s what we know, they are a five piece from Arizona, who claim to like drinking and sex and also reckon they have their own arsenal – we assume here they don’t mean the soccer team so we’ll tread carefully. They also note that their manager is Space Lord and very little is a more sure fire way to win us over than a good ol’ Monster Magnet reference.

Then there’s the music, because as good as this preamble all is, it wouldn’t mean a thing if the songs…..ahem (for a third time, sorry I’ll stop) sucked…. Happily they don’t. “A Year And A Day” is very, very good indeed.

You might just get the wrong impression of the record from the first track, though. “Cuttin’ Loose” drips with sex. It’s not even slightly subtle either given the suggestion that comes before the end that “bring along your friend, you know that three is company, get a little freaky baby, you and you and me”.

Now, to be blunt, such lyrics, good filthy fun as they might be, have been done. And done a million and one times. Right from Poison, knowing the girl to the left of them and the girl to the right, back in 1986 to Axl Rose and Steven Adler’s girlfriend at the end of “Rocket Queen”, rock n roll has been there, done that and bought the wet t-shirt. It needs more than that to survive in 2016, and “…..Day” has it. Lots of it, actually.

There’s riffs a go-go courtesy of guitarists Tim Hills and Pete Avalos. There’s a mighty rumble from the rhythm section of Chris Burgess and Doyle Meredith, then there’s the absolute cherry on top of this sonic cake. Singer Royce Taghon is absolutely formidable throughout, and you actually believe him when he says on “Break It On Down” that he started rocking when he was three years old. His formidable roar brings to mind Chris Cornell on those early Soundgarden records, and there’s a real darkness to songs like “Down And Dirty” which elevates this beyond the realms of some party song about threesomes.

“Broken” for example is ushered in on a mighty wall of sound, and swings like a wrecking ball attached to a Sherman tank, and it probably leaves a mark on the Richter scale when it’s played live.

There’s a couple of moments where the bluster is turned down, but even when they are trying a ballad as they do on “Dead Season” then Voodoo Sex Cult can barely restrain themselves from kicking the crap out of whatever they have nearby.

They let their hair down for another filthy sounding anthem in “VSC-17”, “Sinking Slowly” has some fine drumming and the closing “Black Jesus” has a kind of Corrosion Of Conformity meets Down thong going on, and slinks its way round on a suitably dirty groove.