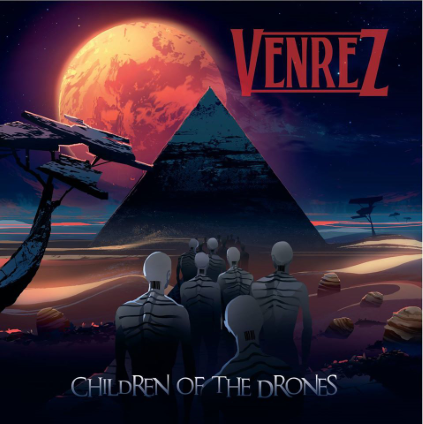 At 56, Steven Berez should have known better. At 60 he definitely should have. But come on, you’ve got a successful career as a Hollywood movie producer, you are entitled to a little bit of a mid-life crisis, right?

Actually if Venrez was the result of Ven (as his mates apparently call him) having a rock n roll itch to scratch, then by now it’s surely a full-blown rash, because some four years after forming, his band are onto album number three. And while they are at it, they’ve toured with Alice Cooper and Slash.

That’ll do you as a potted history, because here’s that third album to dissect, and it matters not what he did or didn’t do in the other career, only what the band sounds like.

The answer to that question is rather easy. In large part, and for much of this record, you keep thinking of one band in particular – Alice In Chains.

Not that the obvious AIC comparisons are a bad thing – they are after all a magnificent outfit, but the template is all here. That guitar sound that Jerry Cantrell can get better than anyone, is all over “…..Drones” in founding member Jason Womack’s work. Opener “Hang The Predator” hooks you in in with its huge chorus, the title track rattles along with a touch more abandon, and “Devil’s Due” has an insistence about its riff.

But it is Ven’s vocals that most lend themselves to thoughts of men in boxes and how we might die young. Often using some sort of effect on them so they sound kind of other-worldly, there is more than hint of Layne Staley here.

It is also a very American sounding record. Again, this is not meant as a criticism, more that you just can’t imagine an English band pulling off a ballad quite so big as “Mists Of Mercy” or the crunch of “20th Reason.”

“Children Of The Drones” often seems to be deliberately restraining itself. This is a shame, as when it cuts loose – like on the Stone Temple Pilots-ish “Spin The Top” it is superb, at other times it seems a little calculated and you wish it felt looser.

Things end with an interesting track, “Sacred Blood” which is more hypnotic than some of the work here, with its incessant drum pattern and ending with feedback and buzzing, it provides some much needed light and shade.

Given the right exposure “Children Of The Drones” has the choruses and the hooks to sell by the bucketload – particularly in their homeland. It would be interesting to see the band live, because you suspect without their shackles, Venrez could be very, very good indeed.

A frequently interesting and technically superb record, you are nonetheless left wanting something just a little more from it.