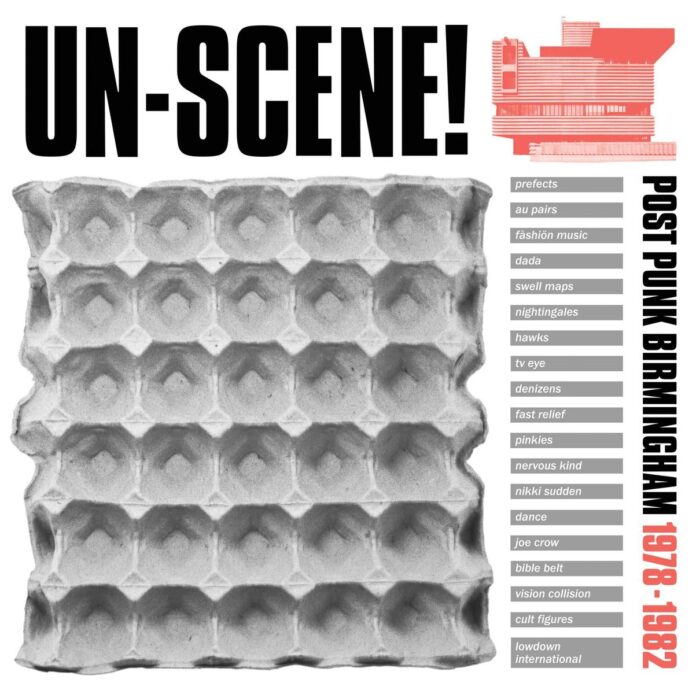 Hands up I’m a born and bred Brummie, the product of two economic migrants from The Island of Ireland as they now say. Un-Scene! covers a few bands who were around during a really formative time as I left my teenage years and entered my very early twenties. I got to see a fair few of the bands on this wonderful compilation in and around Birmingham and especially the Bohemian village of Moseley in which I aspired to live. I ended up in Shirley but that`s another story. The only other similar release that I can remember was `Bouncing In The Red` released in 1980 but I stand to be corrected. This collection was put together by local musician, designer, and local legend Dave Twist.

Some of these tracks were only ever issued on a very small run of 7”`s at the time and some were never issued at all, such as The Hawks, until recently and is also reviewed here on this very site.

The album kicks off with a track called `We’re The Fashion` by Fàshiön Music, who consisted of John Mulligan (bass, synthesizer), Dik Davis (drums), and Al James (vocals, guitar). James became known as Luke Sky, or Luke Skyscraper. It`s a kind of statement or reiteration of who the band are with “we`re the fashion” repeated throughout with some crashing guitar riffs, pounding drums, bass, and Luke`s trademark off key quite deep vocal delivery. Fàshiön were a favourite of mine and I still have a fair few posters advertising gigs around Brum with Mulligan`s trademark styling. I remember discussing the band with Terry Hall from the Specials who said they were the Police in drag, which I didn`t appreciate at the time but on reflection was a pretty amusing remark from a Manchester United supporter who was born and grew up in that well know suburb of Manchester called Coventry!!

` Vertical Slum` is a very brief number from experimental DIY band Swell Maps who were co-founded by Nikki Sudden along with his brother, who grew up in Solihull. It`s wonderfully odd with a kind of spoken word diatribe backed by vocal harmonies that take over as the number progresses. It sounded a bit like an off kilter version of The Stooges `I Wanna Be Your Dog`. Bizarrely compelling.

Duran Duran’s John Taylor is featured in his first band Dada (with Dave Twist on drums) on `Birmingham UK` an interesting listen, recorded live, which almost sounds like something more associated with the prog rock bands of the seventies. It kind of ambles along quite hypnotically and the more you play it the more you`ll come to appreciate it. John Peel favourites The Prefect`s `The Bristol Road Leads To Dachau` is another live recording and again features Dave Twist on drums with The Nightingales Robert Lloyd supplying vocals. A track that runs at just under ten minutes and becomes fairly mesmerising with its tribal drum beat, what sounds like harmonica or melodica snatches, guitar riffs and Mr Lloyd`s intermittent shouty vocals.

Garage rockers TV Eye comprised of ex Moseley Art School pupils Andy Wickett, Eamon Duffy and Dave Kusworth and share `Stevie’s Radio Station` which inspired Duran Duran`s `Rio`. Indeed, Andy Wickett was an early singer in Duran Duran and was also in a couple of other bands that I loved the Xpertz and World Service. Dave Kusworth formed The Stones influenced Jacobites with Nikki Sudden, while Eamon Duffy went on to join the Nightingales. The track really does have a real depth about it. I have `Ammonia Subway` by denizens on seven inch vinyl and they were a band I saw many, many times both as a three piece and a quartet. This song is one of my all-time favourites but it has been with me for over forty years and always brings me back to my wasted youth.

Hawks `Big Store` had a fairly fast pace with some intricate guitar chords that almost seemed slightly off kilter to the rest of the song but gave it a really captivating sense. The lyrics were quite simplistic but seemed to fit in. Towards the end the guitar riff really took off and almost ended up in a tussle with the drums. The band featured two members Stephen Duffy and Simon Colley from the first Duran Duran line up, together with Dave Kusworth, Paul Adams and DaveTwist all ex.TV Eye. I have to admit I don`t remember Nervous Kind but I found `Five To Monday` really joyous. A sort of sixties inspired dream pop.

`Fistful Of Seeds` by Bible Belt had a similar vibe and another band that sadly passed me by. This number and the previous one were recorded at the home studio of Bob Lamb who I saw many times in the classic Steve Gibbons Band line up. Bob also recorded Duran Duran, UB40 and my friend`s reggae band from Wolverhampton, Weapon Of Peace. We have an early Nightingales track with `Idiot Strength` which is a delightfully compelling listen. There is a documentary about The Prefects / Nightingales called King Rocker presented by Stewart Lee, which I implore you to view, which goes somewhere towards paying homage to them.

Lowdown International has BBC presenter Adrian Goldberg taking vocal duties on the track `Batteries Not Included` and it`s an interesting listen, which opens with a sort of repetitive beat and vocals bellowed atop. It does veer off a couple of times on route with a punky group vocal free for all chorus. Enjoyable as it is, I think the future presenter make the right career choice.  We have a solo recording by one time Prefect and Nightingale Joe Crow with `The Final Touch` and it`s a marvellous part electronic, part new wave offering and I can see why Martin Gore of Depeche Mode covered ‘Compulsion’ another JC composition on his ‘Counterfeit’ EP in 1989.

Nikki Sudden shares `Channel Steamer` a wonderful frantic slice of spiky rock n roll with some harmonising backing vocals from Max Edie (Lizard) and superb saxophones tinges throughout. It had that similar urgency and spirit that was also expressed by Fay and Eugene from The Rezillos. The contemplative, deep, nigh on self- analytical `I Remember` is my introduction to Cult Figures. A mellow melancholic sixties tinged timeless classic that has some dreamy organ swathes.

If there was one band in Birmingham during the late seventies / early eighties that were streets ahead of the game in sexual politics it was the Au Pairs. They addressed topics that nobody else would go near in a manner that made you at the time dance and later reflect on the subject matter shared. I was so lucky to see them many, many times in Brum and in London and I remember that when `Playing With A Different Sex` came out there was a free transfer which you could iron onto a t shirt.

I wish I still had that shirt, not that I could get into it these days. As for the track shared here `Love Song`, my god, just listen and they rave about bands like The Fontaines DC these days!!! Fast Relief were another band that I saw numerous times and I must have cassettes recorded at their shows and photos somewhere in the loft. `What A Waste` was almost the FR anthem. This brought back so many happy memories as I listened to it. They were cut from the same cloth as the Au Pairs but I felt they were much more funkier with blistering saxophone nuances, akin to a band like Pigbag but political.

Another new one to me was Vision Collision and their Bob Lamb produced track `Cuba` which I have to say reminded me of Department S and their hit `Is Vic There?` in it`s quirkiness. Terry Lilly was a member and later formed the endearing and much loved local skiffle band Terry and Gerry. `Revolve Around You` by Dance is another startling introduction to a group I’d never heard of or remembered. The track is a funky reggae tinged outing which will really suck you in and just over the midway point veers off with a captivating dub like remix.

This compilation closes out with `Open Commune` by The Pinkies, a band that I saw frequently around and about and loved. They had a kind of dreamy vibe with splashes of new wave, funk and reggae and were pretty unique at that time having a female lead singer who also played sax. This number gives no better a flavour of their dexterous sound.

Well, what can I say, `Un-Scene : Post Punk Birmingham 1978-1982` for me was a completely uplifting and joyful hour plus spent revelling in bands that were part of my misspent youth and a few that I scratch my head and think “how the hell did they pass me by?”. For me, this album was almost overwhelming and filled me with mixed emotions for times gone by, musicians that are sadly no longer with us but it also evoked a sense of pride in the musical heritage of my Hometown.

We now have a permanent document of a musical moment in time that our great city can listen to, reflect on with satisfaction, and have Dave Twist and all involved to thank for producing this opus.