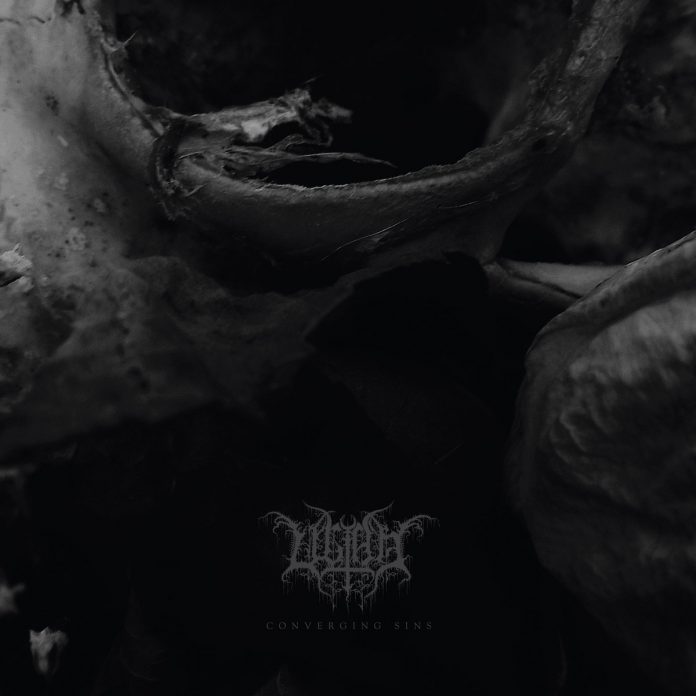 2015’s debut album, the H.P. Lovecraft-inspired Pain Cleanses Every Doubt, gave some indication of how the united forces of musicians with such a rich and varied musical history might combine to deliver the darkness.

The debut was chock full of demonic blast beats and razor wire riffs so much so that it took a couple of more listens before the intricacies and subtleties began to reveal themselves. In a way Converging Sins is not that much different, although this time the listener may have a certain idea of what to expect.

On the vocal side, as the album opener “The Night Took Her Right Before My Eyes” reveals, it leans heavily on the dual-side of tortured and emotive. Just as a black metal vocal should be.  As the album opener, and weighing in at a mere 17 minutes, it begins with an acoustically chilled foreboding that soon gives way after a few minutes to an organised chaos with the mantra “Cold is the soul that left it’s path”.

Guest vocalist Rachel Davies shines on the second track “Mirrors in a Black Room” which has a haunting and ethereal quality backed by a majestic and sweeping arrangement which makes the most of Davies voice. About halfway through the black metal element comes through like a wolf through the misty woods. It doesn’t stay long but long enough to make its impact felt.

“You Will Learn About Loss” is a 14 minute landscape of desolation, desperation and inner suffering. There is no light at the end of Ultha’s tunnel. Do not look for hope as it does not reside here.

As with the majority of classic Black Metal releases what happens in the quieter more introspective moments is just as important as the full-on raging beast of tempo. Whilst the ‘pin back your ears’ moments are many there is also room for multi-layered atmospherics and tension-building sections that send a shiver or six down the spine.

The closer “Fear Lights The Path” is the most ambitious and daring of the five tracks, taking well over four minutes before kicking in with the blast beats and riffing that one might expect before leaving it another minute or so before the vocals bellow in from the depths of hell.

This album is the sound of a band who have taken from the purest essence of black metal, added their own experiences and if you are searching for the way to the underground, then let Ultha show you the way.