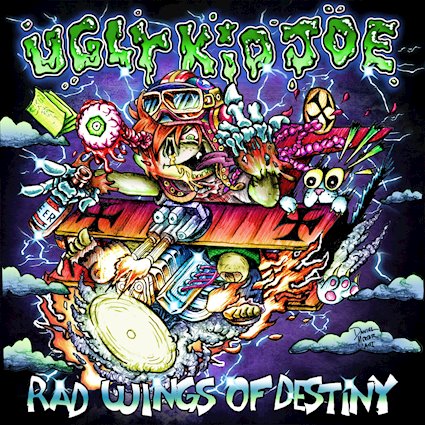 There will – and I can say this with all the confidence in the world – be a moment, about two seconds in to “That Ain’t Livin’”, the opening track here, where you go: “yep, that’s an AC/DC riff.”

Ugly Kid Joe aren’t shying away from that on “Rad Wings Of Destiny” (the title is a homage to Priest, singer Whit Crane has confirmed this). There’s three songs that could, basically have Angus playing the lead.

The opener is one, the album’s highlight “Dead Friends Play” is another (that one actually namechecks the Young’s)  while “Failure” completes the trio. They are the best things here, it has to be said. “….Play” in particular is superb. Showing a respect for the heroes of the past and a total understanding of rock n roll history.

The rest, perhaps (in the main) is not as consistent, but that’s not to say its without it’s moments. “Not Like The Other” is stomping and shining as any glam rocker for example. Clad in its Platform shoes, its not too far from Sweet or Slade. It’s a lot of fun.

“Kill The Pain” is darker. It builds to its hook and underlines again that Klaus Eichstadt and Dave Fortnam are a really underrated pair on guitar. The band generally have a chemistry. Except for drummer Zac Morris, it’s the same band now as in 1991 when the debut EP came out.

Whether they’d have done “Up In The City” then we can debate, but its funky and understated, a real 1990s feel (think Soul Asylum and alt rock radio back then) it’s that wilful air of experimentation they’ve always had. “The Long Road”, the last one on the album is another you can say that about.  More Americana than Hard Rock, its chorus alone is one that is made for arenas.

It does need to be said, however, there’s a couple of moments here that aren’t up with the rest, “Lola” is a brilliant song. Everyone knows that, but the fact that everyone knows it is a double-edged sword. Do we need a new version? Does it bring anything different, I’m not so sure.

Then there’s the country rock “Drivin’ And Drinkin’”. On one hand, credit to them for trying something new. On the other, it’s not very good, and that’s the bottom line, isn’t it?

A lot was made in the build up to this that it saw them working again with Mark Dodson, the man who helmed their “America’s Least Wanted” record in 1992. Largely, though, it doesn’t even attempt to be that Ugly Kid Joe anymore, the dumb poster boys for Beavis And Butthead or Wayne’s World – like them, its of its time.

I know that because I bought that record on the day it came out (as I did the “As Ugly As They Wanna Be” EP before it). The fact is, we’re all 30 years older and I don’t hate everything about you anymore (I do think sex is overrated too – another of their lyrics from the era –  but only because I am too tired to care, mostly) but I still sing along when they play it live. So “The Rad Wings Of Destiny” – the first Ugly Kid Joe album in seven years – deserves points for not re-treading old ground and desperately trying to find its youth. When it gets it right, it’s very, very good indeed.