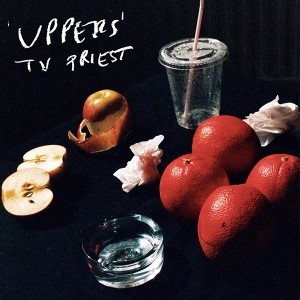 In November 2019 London post-punk four-piece TV Priest, vocalist Charlie Drinkwater, guitarist Alex Sprogis, bass and keys player Nic Bueth and drummer Ed Kelland played their first show to a smattering of friends in what they describe as an “industrial freezer” in the warehouse district of Hackney Wick. Fifteen months on they have signed to Sub Pop, released a couple of singles and have an album “Uppers” set for release this month.

The album kicks off with `The Big Curve` with its grinding guitar riff and the statement of “This could be the first day of the rest of your life” belted out and I was put in mind of Talking Head`s `Once In A Lifetime` but with one hundred per cent more belligerence. It sets a marker for the rest of what`s to come and Charlie`s vocal delivery sits somewhere between Cathal Coughlan and Mark E Smith`s Fall. There`s a recuring inquiry of “where do you sit on the big curve?” an open-ended question which could allude to a number of issues. A song inspired by Charlie’s grandfather’s life’s work as a photojournalist and war correspondent on the UK’s Fleet Street from the 1950s to the early 1980s follows with `Press Gang`.” The song is about the shifting role in the dissemination of information and ideas, and how the prevailing narrative that the “Death of Print Media” has contributed to a “post truth” world. The repetitive drumming had an almost hypnotic effect with crashing guitar chords and vocals spat out atop. A number Gang of Four would have been proud of.

`Leg Room` is an interesting composition with vocals that are almost distorted seemingly relating possibly random thoughts as the music races not incidentally in the background but almost in competition at times and ending abruptly. There`s a sort of diarist feel to `Journal Of A Plague Year` with narration shared as if reading a list of events with a mesmerising rhythmic music backdrop that does veer up and down at times.

`History Week` is a couple of minutes instrumental respite where you feel something is about to happen but doesn`t.  We`re back on track with `Decoration` which highlights Charlie’s lyrical sketches that captures the incongruity and mundanity of life. Its opening and closing line (“I’ve never seen a dog do what that dog does”) is a misremembered quote by Simon Cowell about a performing dog on Britain’s Got Talent. Charlie says, “We often said it in the studio as a kind of in-joke when someone did something good or unexpected. Having already toyed around with the ‘Through to the next round’ line,’ this seemed too good to leave out.” and the chorus “It’s all just decoration” is credited to the two-year-old niece of Alex’s fiancé, who reassured him after he pretended to be scared by Halloween decorations. All this and its set to an entrancing funky post punk beat

`Slideshow` is another parody on the here and now and our obsession of staring at our mobile screens all day. I loved the almost warped and twisted guitar riffs, thumping bass line and pounding drum beat, a wonderful cacophony of sound. A pulsating drum beat, crashing guitar riffs and a spellbinding rhythmic bass line lead us through `Fathers And Sons`. A track about covetousness and our increasing need to acquire the latest goods with an unnerving enquiry as to “how you feeling friend?” conveyed in a manner that you`d seriously think twice about before replying as to the consequences that may follow.

`the ref` is another instrumental breather, which sounded like the ascent or descent of a goods lift. The questioning `Powers Of Ten` is a dreamy affair musically where it seems that answers to life are being sought.

`This Island` races along with an unremitting beat with grinding, colliding guitar riffs that complement the lyrical content alluding to a creeping nationalism or xenophobia within this island nation. The album closes with `Saintless` which is a letter to the singer`s new-born son. It`s about how as parents we’re fallible and human, and while the world can be a difficult place at times the one thing that gets you through is giving your love to those that need and appreciate it. There`s a relentless intense beat with guitars, bass and synths that builds as it proceeds and allows the passion and emotion of the personal sentiment of the lyrics to shine.

TV Priest have produced an album that is overflowing with anxiety, unease, political angst, despair, and uncomfortable questions but there is also an underlying message of enthusiasm, optimism, and hope. They deliver a stunning untamed raw musical energy that if you appreciate bands like The Fall and The Fatima Mansions, you`ll enjoy TV Priest.

This is a band that are certainly on their “Uppers”