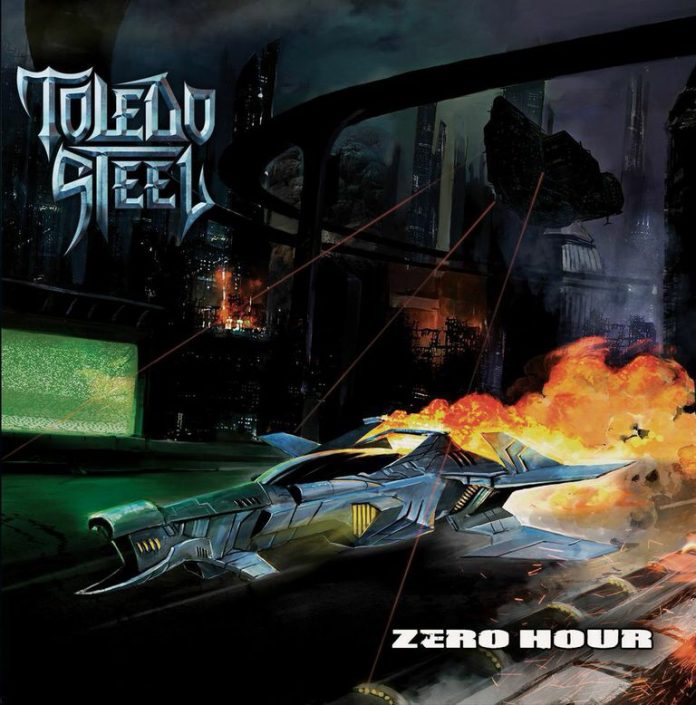 Recently, MVM had the pleasure of watching Swedish metal troopers, Portrait on their first ever UK tour. The support band for the jaunt was Southampton’s leather clad noise makers, Toledo Steel. Their fine set, tight, melodic and extremely well played Speed Metal, was a pre-cursor to this, the release of the bands second EP.

The half hour they hurtled through that night is mostly contained within the six tracks here, and if the opening instrumental title track is understated, it’s the only thing on “Zero Hour” that is.

The rest, from “Fallen Empire” and it’s early Maiden intro, to the closing eponymous song, is gloriously OTT, pedal-to-the-metal-foot-to-the-floor-and-eat-my-dust, sucker music that has it’s horns up and it’s head down.

“…..Empire” rather sets the tone. It has a catchy riff, it is bursting with enthusiasm, and for all it’s retro appeal, it does have a modern touch that sets this apart. This is perhaps best shown on the lead single from the EP, “City Lights.” A track that is unmistakably rooted in British metal , but has a crunch to it that means that this is far from something picked up off Steve Harris’ cutting room floor.

If “Children Of The Sun” slows the pace a touch, it’s only so they can add an extra hook to the intro, and a chord sequence that isn’t too unlike Kiss’ “Love Gun.” All the while this is going on singer Rich Rutter pulls off vocal dexterity that puts Hell’s David Bower to shame.

The record doesn’t allow for let-up’s and you wouldn’t expect a track called “Speed Killer”  to provide too much of a lull would you? Instead it is nearly six minutes of whirlwind and is, you sense, Toledo Steel really letting their collective hair down, while the track they name after themselves (and didn’t the world’s greatest band do that on their debut….?) is full of mysticism and battle. It provides a tumultuous close.

A few years ago, all the talk was of a New Wave of the New Wave Of British Heavy Metal. Despite some fine music emerging such a thing never quite happened. The time is right, surely, for this most glorious and pure sound to return. If it does, Toledo Steel are going to be right at the forefront. “Zero Hour” is a magnificent statement of intent.