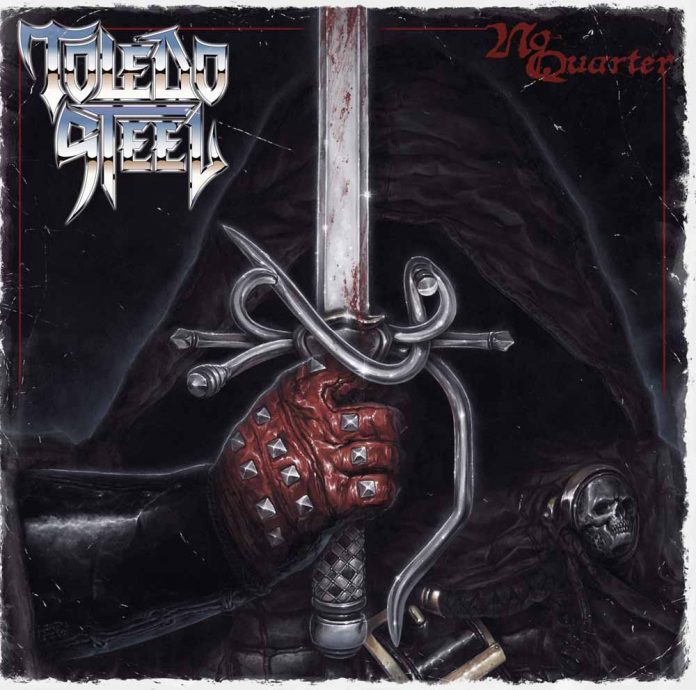 Back in 2015 the EP from Toledo Steel was reviewed on these pages: “A few years ago, all the talk was of a New Wave of the New Wave Of British Heavy Metal.” I chirruped, studs on my patch ridden denim jacket for good measure. “Despite some fine music emerging such a thing never quite happened. The time is right, surely, for this most glorious and pure sound to return. If it does, Toledo Steel are going to be right at the forefront. “Zero Hour” is a magnificent statement of intent.”

In the intervening three years since “Zero Hour” there have been plenty of bands who have taken to the stages of the UK with metal in their hearts and a riff at their fingertips, and whilst, perhaps none of them have yet crossed over in the way they had hoped – and need to if someone is going to pick up the cudgels from the old guard – then there are a number of beasts stirring right now. In the last couple of weeks we’ve reviewed new albums from Primitai and Monument and to those, you can add “No Quarter” the debut album from Toledo Steel.

Eight of the most traditional sounding metal songs anywhere. “….Quarter” actually begins with its longest and most ambitious moment, seven minutes of “Behold The Machine” and actually there is plenty to behold here, not least of which this the galloping riff, the wonderful solo from Tom Potter and Josh Haysom and the vocals of Richard Rutter, who to is most versatile throughout.

Appropriately for a band that is named after the weaponry material of choice for the Roman hordes, Toledo Steel spend the opening of their title track storming the castle, while whatever lurks at the bottom of “Cemetery Lake” you wouldn’t want to go diving to find it. Drums fire off like machine guns, and there is something evil here. Mercyful Fate as a starting point, maybe, but this is the very alchemy of Heavy Metal – right down to the Maiden-esque chant.

Even Toledo Steel would admit, surely, that they are in thrall of the greats, but they are good enough not to be a derivative copy. “Visions In The Fire” builds on a mighty bass groove, and is as English as cricket on the village green.

“Rock Nights” sounds exactly like you’d want a song called “Rock Nights” on an album like this to sound. A proper gallop in other words, “Sight Of The Sniper” kicks it like old-school Judas Priest – the sound of a band delivering the goods if you will – but also veers into some power metal just for fun, while if you are cheerfully going to name a song “Heavy Metal Headache” then you’d best be able to headbang to it. They have and you can. And it sounds like something off Motley Crue’s first album too.

“When The Night Draws In” ends the thing with the same kind of intent as the other seven. It also sounds just as full of beans. And Rutter has the same kind of grandiose delivery for his fear of the dark as another singer you might have heard of.

But Maiden, Priest, Saxon and whoever else you want to mention aren’t getting any younger, and if heavy metal is going to survive their loss then it needs bands like this. No half measures, with “No Quarter” Toledo Steel prove they are the real deal.