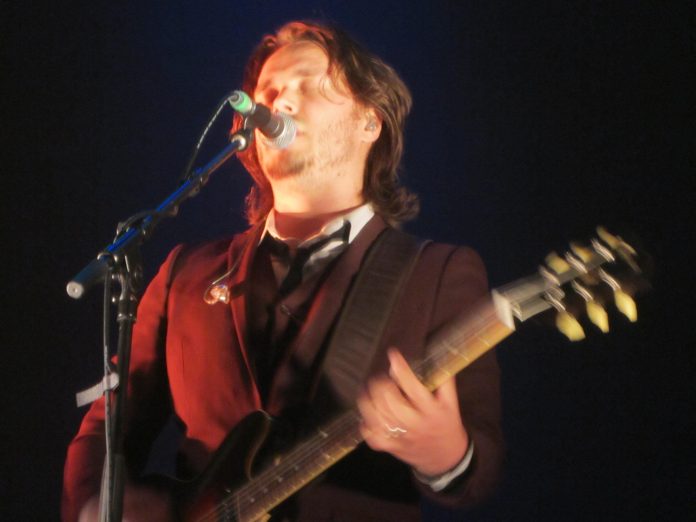 Smartly suited and booted, alternative, post-punk, early new-wave three-piece, Enation, hit the stage with little fanfare and belt out their opening number `She Drove A Nail.`

The band were formed in Battle Ground, Washington, in the Pacific Northwest of America in 2004 but relocated to Nashville, Tennessee. The troupe are made up of siblings, vocalist and guitarist Jonathan Jackson and drummer Richard Lee Jackson, along with friend, Jonathan Thatcher on bass, who was invited to join the band last year. The next offering` A Shock To The System` is a track that has been going through my head ever since I first heard it and it has a quality and feel of U2 around the time of the War album in 1983. The song is the new single from their fifth studio album, “Anthems for The Apocalypse” that was released last year, the follow up to 2014`s “Radio Cinematic” The boys throw a real left curve with a truly wonderful and very different cover version of Peter Gabriel`s `Digging In The Dirt.

There’s a shout of “Who are you?” and “Come on Smile!” from the audience and in response Jonathan, confirms the band`s name, smiles and visually seems to relax. This bodes well as his vocal range on `Thousand Mile Stare` the next song is truthfully awesome. The set closes out with two more cuts from the latest release with `Ascending` and the real rock out `Anthem for The Apocalypse` with the poetic `I See God In You` sandwiched in between. This was this arrangement of the band’s debut shows in the UK and I for one can`t wait to see them again. There is not outlandish gesturing but solid, tight musicianship with songs that have some interesting lyrics, some wonderful hooks and a guy who can certainly belt out a tune. I’m sure this will be up there in my gigs of the year come December. Keep an eye on these guys.