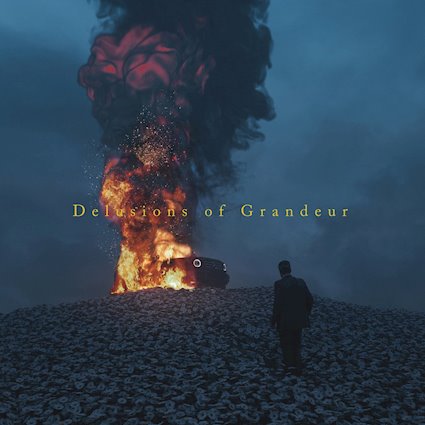 Dublin`s much lauded psych noise pop sextet THUMPER release their debut album LP ‘Delusions of Grandeur’ this month and for me it was a much anticipated release. I saw the band back in October of last year at the intimate Sunflower Lounge in Birmingham on a bitterly cold Sunday night and was amazed that they had managed to fit all six members on the stage along with the two drum kits they have. The group grew from a lo-fi bedroom project written and home-produced by frontman Oisin Leahy Furlong, who released three E.P. cassettes and through word of mouth it lead to the inevitable formation of a live band. Today the band comprise of Oisin Leahy Furlong (vocals / guitar), Alan Dooley (guitar / backing vocals), Alex Harvey (guitar / backing vocals), Dav Campbell (bass / backing vocals)., Stevie D’Arcy (drums) and Benedict Warner-Clayton (drums).

The album opens with `Fear of Art` with its nervy edgy guitar riff intro which leads us into a quite mesmerising nigh on hypnotic composition. This number according to frontman Oisín is “about self-image, and your capacity to change. To reach beyond your comfort zone and become a ‘better’ person. The two verses represent the two sides of your brain, one pragmatic and one a dreamer. The chorus is a third entity laughing at the prospect of the whole thing, that the struggle will never mean as much to anyone else as it does to you.” It does have that feel of somebody enduring an internal conflict with vocals that are quite delicately shared then become more insistent as the number progresses. A cracking opening. I remember from the live show that the

opening riffs to `Ad Nauseum` reminded me of The Hives and this number relates to the frustration of a relationship has a delightful driving beat and lyrics of “You’re going on and on and on and on and on…”.that will enter your subconscious and have you singing them for the rest of the day, if not your life! The frustration in the vocal delivery is almost tangible.

`25` is a blistering driving pounding submission with its forthright lyrics of “Jesus Christ, Is that the time?, I’m making a hames of being alive, I`m naked, i`m nothing, to no one, Jesus Christ, Is that the time?” which seems to reflect the narrator`s recognition of life passing them by. The tempo reminded me of Australian band Pendulum`s `Propane Nightmares`. There`s a slight change of pace with `Greedy Guts` which begins very quietly but blossoms into a more stop start intensive offering. There`s some delightful scorching guitar riffs throughout and lyrics that can be interpreted in a number of ways.

Next up we have `Strychnine`, which is a crystalline powder that when inhaled, swallowed, or absorbed through the eyes or mouth, causes poisoning which results in muscular convulsions and eventually death through asphyxia. This possibly goes someway to explain the toxicity in the lyrics for this said song. It opens with a strummed guitar and gentle vocals before emerging into a much more belligerent and almost uneasy confrontational number which ends abruptly. `The Loser` has a quite 100 mph psychedelic vibe to it with lyrics that are delivered in almost a nursery rhyme style or format. Lead singer, Oisin, says that: “‘The Loser’ is presented as a love song but is howled by an unreliable narrator. A fishing-for-compliments style tirade of non-sequiturs, each verse is bursting at the seams with faux self-depreciation.”

`Topher Grace` is named after a star on the American television sitcom `That`70s Show` a song that is a fairly intense slow burn with lyrics almost spat out. It kind of rolls along with lyrics that seem like a stream of consciousness but having read elsewhere, it came together from ideas written on scraps of paper and on iPhone notes over a few months. A captivating and entrancing tale of self-destruction raged by sex and alcohol. The final three numbers make up the twenty minute Overbite Suite consisting of three songs recorded and performed as one long piece. An epic attempt at pushing past the mould of what a ‘song’ can be, in part justified by the album’s title.

It consists of (i) `Overbite` which has lyrics full of nightmarish images alluding to the failure of a relationship. It`s a kind of grinding churning piece that ebbs and flows and takes a short break midway through before progressing. This is followed by a guitar laden instrumental (ii) `The Ghost` that has bass and drums joining to share a cacophony of controlled noise before concluding with (iii) `Down in Heaven` which has a guitar chord riff accompanying the vocals which sound almost distracted  or preoccupied. It builds both musically and in intensity as other instruments join to expand and fill out this piece.

The group have alluded that `Delusions of Grandeur` however is not just a statement of musical intent. The LP’s title refers to a struggle of self-image, internal and external, and the existential maintenance that all of this implies.

I thoroughly enjoyed this release and found that THUMPER are a collective that are unable to be pigeonholed, which others may find frustrating but I find alluring and draws me to a band like this.

Dublin is awash with so much great music at present and to me `Delusions of Grandeur` is as essential as any of the other fated post-punk outfits from their hometown.