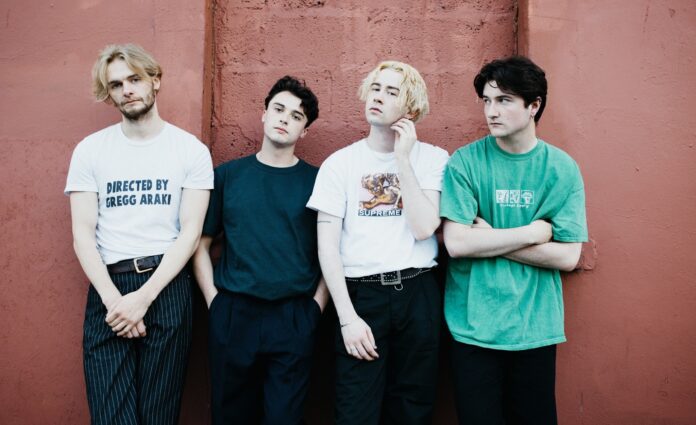 After rapturous praise for their recently unveiled single Us towards the end of last year – listen here: https://www.youtube.com/watch?v=cbtxRNABq6A – which found support across countless tastemakers, Irish indie-rock outfit modernlove. are back with their vibrant ways as they deliver their energetic new single FOLLOW YOU on Akira Records (Phoria, Henry Green, Mt Wolf, Rosey Carney, Shura).

Continuing more of the bold and blistering pop-rock sound for which they have earned a reputation, FOLLOW YOU delivers a knockout punch of frenzied guitar hooks and catchy vocals from start to finish. Produced and mixed by Tom Leach (Col3trane, Lewis Capaldi, The Streets) and mastered by Kevin Tuffy (Alfie Templeman, Matt Maltese) the single is a rousing ode to the anthemic indie bangers of the early 00s that the boys grew up with. Filled with the same charm and textures of their recent material, and beautifully captured in the colourful video, the group have kicked off the year with spirited finesse.

Speaking about the new single, the band say: “Follow You is a love song about the early stages of infatuation in a relationship; about finding yourself in a relationship so intimate that spending each waking moment together still isn’t enough, hence the lyric ‘When you fall asleep I’ll follow you’. Musically, we wanted to write a song that resonated with the nostalgia of those same naïve infatuations, that took us back to when we first started the band as teenagers, finding ourselves as people as well as artists.”

Their debut monochrome blue EP, released in September last year, saw modernlove. combine their earliest work into a statement debut offering. Featuring the singles Liquorice, 2 Missed Calls and lmk (if you wanna see me), they received strong playlist support, landing on New Music Friday UK, Fresh Finds, The Pop List and Alt-Pop on Spotify and New Music Daily, New In Alternative and Breaking Alternative on Apple Music. They also received radio support from BBC R1, BBC 6Music, BBC Ulster, XS Manchester, Across The Line and Radio X; were named as the Official Charts Ones To Watch; and featured in the Irish Times 15 Fine Music Acts To Listen To In 2022.

As the name suggests, modernlove. explore the complexities of the modern lives of twenty-somethings. Even though their lives remain complicated, Barry, Cian, Danny, and Graham, all from Drogheda, have already nailed their sound, delivering polished indie pop with a glossy sheen and intricate details.