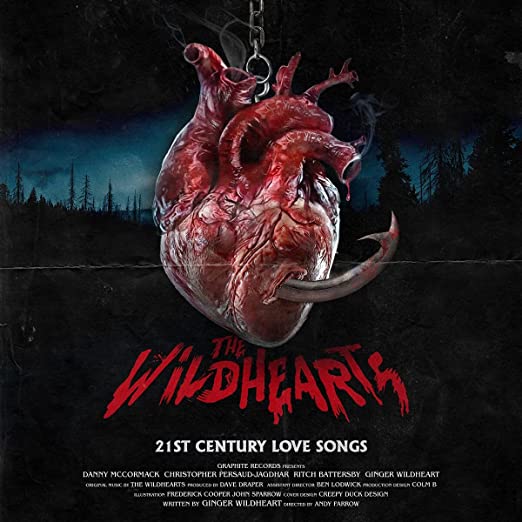 Upon its release a month or so back, “21st Century Love Songs” made the UK album charts top ten. This made it The Wildhearts highest charting record since 1995’s “P.H.U.Q” (number six). There’s a reason for saying that.

Three actually. First, there’s the usual disclaimer: The Wildhearts are my favourite band, since 1995, actually. Second, the sound of “….Love Songs” is kind of a return to that era of the band. And third – this is the most important one – no one in the band, I should think, gives a shit, and moreover, music this uncompromising probably wasn’t made for mass consumption anyway.

The title track here – the one that kicks the album off – is typical of the record as a whole. This is a grower. One that demands your time, a collection that only reveals itself and its absolute majesty with listens and when you read the lyrics on the gatefold vinyl.

And if you’re thinking “ahhh but this is the Spotify era, who’s got time for that?” then with respect, you don’t deserve this record.

The rest of you, here’s the deal. The “classic” (with all the love in the world to the other line ups) quartet are back together again. The seven legged rock machine (as one of their t-shirts so memorably dubs it) are here again and they’ve got a chemistry. On one hand they are ferocious, on the other they have the sweetest melody, barbed wire stitched into a velvet glove. The way they always were.

The lyrics to go with it are acerbic:

“Where is the song where they split and they can’t even say why?

Or where they ghost one another ’til they finally die?

From a relationship built on a succession of lies”

Seems to sort the vibe out. That’s a lyric from the title song, and maybe you don’t understand it. Or maybe you do, and you live in hope that some woman will come to her senses, but then as Therapy? pointed out: “happy people have no stories,” right?

“Remember These Days” is one of the most accessible. Like a gang celebrating, being out there. Still doing it and still finding that after all they are “bits of kids, trying to sing like Jake”. Stiff Little Fingers are the kings, even heroes have heroes, after all.

“Splitter” is one of the ones that most exemplifies the thing I talked about. Give this time and what seemed – on first listen – to be a throwaway single turns into something more. That thought “I am not chasing the person no more, I am chasing the memory” sears into the conscience and there’s a stoicism – a kind of “fuck you, you won’t beat me”.

Working on the principle that everyone at this point who is buying this understands the career of this band, then if I say that this is like a cross between “Fishing For Luckies” and early b-sides you might get it. Certainly, “Institutional Submission” twists and turns like a prog song and the breakdown is arguably the heaviest thing they’ve ever committed to in a band setting. The words, as vicious a put-down of the “mainstream media” as you can imagine: “On the bottom shelf, by the kids magazines/We are force fed filth from infancy/A right wing plan creates your view/Of a world that doesn’t have room for you.” And if this isn’t the fightback, then it feels like one.

“Sleepaway” which ends in a kind of pun on the lyrics of “Gimmie Shelter”, is an interesting one. There’s a Celtic feel to these ears, and its one of a few that confront personal issues head on – as Ginger’s words always do. Maybe there’s a Wildhearts fan who doesn’t connect with those thoughts, but I hope not.

“You Do You” is more than a singalong. It’s genuinely funny, but lays waste to “experts” in 2 minutes and 42 seconds of brilliance, and the “trademark” Wildhearts sound – that is to say if you wanted to try and tell a new person what this band was about – is all over “Sort Your Fucking Shit Out”. A little like “Diagnosis” from their comeback record, this one is serious, personal stuff. Perhaps the most personal one of their careers, and (I think) the first time Ginger has written in the first person like this.

“Directions” might begin with a riff that echoes Slayer (seriously!) the rest lays into, well….I’ll take a guess, that he’s a tubby bag of shit who lied about having coronavirus last year: “The fear grows in his elite shaped gut/An expensive suit and a cheap haircut/And a mouth that he never learned how to shut” and even if it ain’t about Johnson, then screw him anyway.

It’s the boldness that gets you most. Writing a rock song about going to the gym to improve your mental health is close to genius, nonetheless that’s what “A Physical Exorcism” does and the interplay with Ginger and CJ here is as good as it gets.

“My Head Wants Me Dead” adds a real groove, like Kerbdog, or Wilt (or any band that Cormac Battle was in, I suppose!) and it ends in such a way as to leave you wondering. A big closing crescendo, but an abrupt crash out of the maelstrom. It’s as surprising as the rest of it.

A few weeks ago, Ginger had said The Wildhearts were “just a band” and fans launched on it with passionate zeal, explaining why they were more. I could have said that last October one of the reasons I sought treatment for mental health issues was because of one of their songs, I could also have said that when I wrote that in a review how they had helped me through the period, the fact that Ginger contacted me then meant more to me than he’ll ever know, but ultimately, its not for me to tell him what he should think of his band and I wouldn’t dream of so doing.

What I will say is that for 26 years this has been the band I’ve turned to in good times and bad, happy and sad and they are the band that means more to me than any other. All of which is subjective, clearly, which is why I write about The Wildhearts like this. Because – and I acknowledge the point that as Axl said once “vicarious existence is a fucking waste of time” – the songs that this band create are a part of my life in a way that no others are.

So my opinion on it matters for everything to me and nothing to anyone else, but nonetheless, I believe that “21st Century Love Songs” is up there amongst their very, very best work.

Rating: I don’t give them to this band.