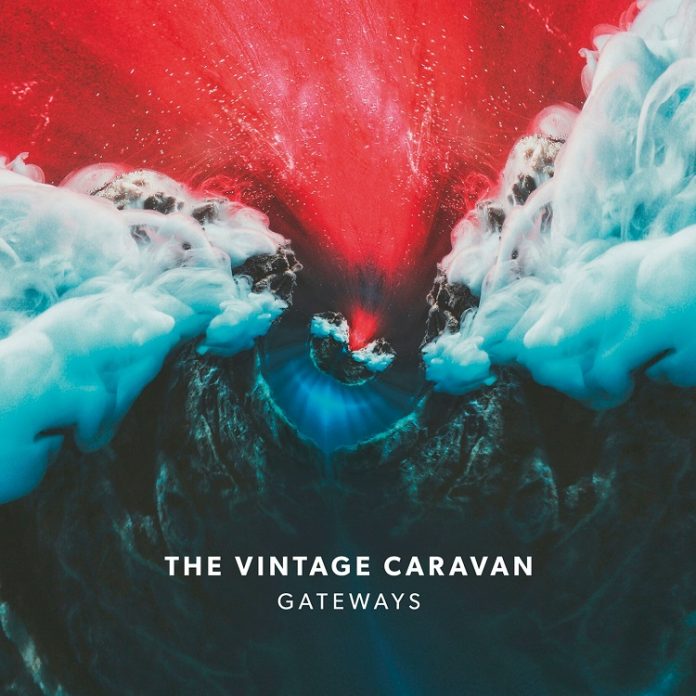 It is interesting, sometimes, to imagine you had only one word to put in a review. Some are better at this than others. My brother can usually get right to the point. Asked what he thought of At The Drive In when they supported Royal Blood he said simply: “bollocks.”

Then, like me there are those of us that have never knowingly used one word when 100 will do. But even allowing for this, when I was listening to “Gateways” – the fourth in seven pretty whirlwind years for Icelandic three piece The Vintage Caravan – the word I kept coming back to was “groove”.

They’ve always been superb. I remember going to a venue that is no longer there in Birmingham to see Blues Pills and having the opening act – who were rocking cardigans if you please – completely floor me. That band was TVC, they were impossibly young then (crikey, they’re hardly grizzled veterans now!) but they had something.

With the ten tracks that make up “Gateways” they’ve made their most ambitious work to date.

It is pretty much immediately clear that everyone here knows this is special. “Set Your Sights” builds its way up into something epic, and then – that word again – the groove hits you. Big, ballsy, riff heavy, and you find yourself wondering why Rival Sons can’t do this anymore.

Óskar Logi on guitar and vocals plays a bit of a blinder here. Yeah, people are going to namecheck Deep Purple when they talk about TVC, but there are hints of something a little more modern too. Listen to the opening to “The Way” and you’ll hear something a bit Lenny Kravitz in its mix. Arena rock in all but name – and you best believe that when Logi offers “ride me like a Cadillac” in one of its lines, the little ones are all grown up.

“Reflections” builds on the back of something strident from rhythm section of Alex Örn on bass and drummer Stefán Ari and it’s sound is one of a prog song. Not that it outstays its welcome – nothing here does – its more that there is something of the outer space here.

“On The Run” has a sort of Rainbow flavour, while you can even feel the fact that “All This Time” is made to be played live, likewise, there is a driving, pulsing urgency about “Hidden Streams” right from the funky intro.

It is striking that wherever this goes – and it explores many places – it does it with both a class, but their own stamp on it. To that end, “Reset” comes on like some lost Hendrix song, but by the time the chorus hits, it sounds as though it could only be The Vintage Caravan.

There’s a trippy, psychedelic side to them too. There always was, it’s just more to the fore here on the likes of the brilliant “Nebula” which floats away, almost, with not a care in the world, while the ambition of the band is shown so very clearly in “Farewell” which is the work of an experienced band with very clear ideas and no little skill.

The record finishes with “Tune Out” which largely ties up the loose ends. Right from the bluesy vibe, to the mellow, blissed out feel, and all the way through to the blistering guitar solo, it is a very neat snapshot of what the record as a whole is about.

“Gateways” is confident, its classy and it is the album that Vintage Caravan needed to make at this stage of their careers. And this is a real groovy – in all musical senses of the word – journey.