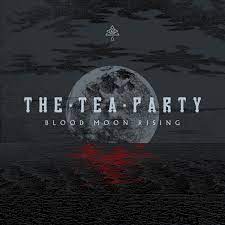 I have to admit that I really love The Tea Party and was fortunate enough to see them quite a few times live. On one occasion they were joined by Roy Harper who went on to record his vocals on a track called `Time` which was on the `Alhambra` EP released in 1996. I kind of lost touch with the band around the time they put out `The Interzone Mantras` in 2001. They split and then got back together and now have a full-length record titled `Blood Moon Rising`, which features eleven tracks recorded by the band over the course of five years in Canada and Australia, compiling the self-released “Black River” EP with a selection of new compositions.

The album opens with `Black River` and I have to say it`s a cracker and like these guys have never been away. A real bluesy rock out. Imagine if Led Zeppelin and Deep Purple spawned a child, what I’d call classic Tea Party. We have pounding drums, a resonating guitar riff and enticing harmonica tinges shared across `Way Way Down` a wonderfully dark and dirty slice of blues rock.

` Sunshower` is a more introspective, kind of reflective musing which has that delightful dreamy acoustic guitar tinge that this band were so great at laying down. In the latter part we are gifted a wonderful blistering guitar solo as the song builds to a climax. I have to say `So Careless` was a bit of a curve ball for me and sounded a little different. A sort of mid paced love song with some captivating key come synth swathes. A number with lyrics that recognise taking that special someone for granted.

` Our Love` is a nigh on acoustic love song that has that almost orchestrated larger that life texture that only a band like this can achieve and deliver, the genuine heart rendering sentiment in singer Jeff Martin`s vocal delivery is almost tangible. There`s a delightful edginess to `Hole In My Heart` which seems to stop and start or ebb and flow as it progresses. A number that seems to hint of a friend who has taken a different course in life that you don`t approve of but still look for their redemption.

`Shelter` is driven by a drumbeat at heart with some intricate guitar chords shared as it evolves and some dreamy wistful vocals. It does rise in volume along route but still retains that quite detached calming sense. There was an almost warm feel about `Summertime` a song made for those enjoyable sunny holiday get togethers while sharing a few beers.

`Out On The Tiles` is a cover of a Led Zeppelin number, which is now over fifty years old and written around a British term for going out on the town. It`s a pretty faithful and respectful version of a long forgotten classic.  We seem to have a breakup song in `The Beautiful` a mid tempo offering.

The album closes out with title track `Blood Moon Rising (Wattsy’s Song)` and again it`s not what I’d expect. It has a strummed acoustic guitar with an organ refrain running through it and what sounds like a steel guitar at times. It`s the kind of number that will have the faithful joining in, lighters and phones held aloft in a live setting.

There`s a limited edition version of the album which includes a further three tracks. The first a really interesting cover of the now forty year old Joy Division song `Isolation` which although updated and slightly longer retains that sense of remoteness as on the timeless original. Next is a cover of `Everyday Is Like Sunday` an exemplary track from Morrissey`s debut solo album, a brave track to attempt and one that I feel they have done justice to. Finally, there`s a live version of `Way Way Down` which although still bluesy has a much more rock sensibility about it.

I’m absolutely delighted that The Tea Party, (Jeff Martin vocals and guitar), Stuart Chatwood (bass and keyboards) and Jeff Burrows (drums and percussion) have got back together and have released new material. `Blood Moon Rising` is a stunning album but should be no surprise for long term followers of this band. As the late great football manager Bill Shankly related “form is temporary but class is permanent” This year marks the thirtieth anniversary of The Tea Party and I can`t think of a better way for them to mark it than with this new release