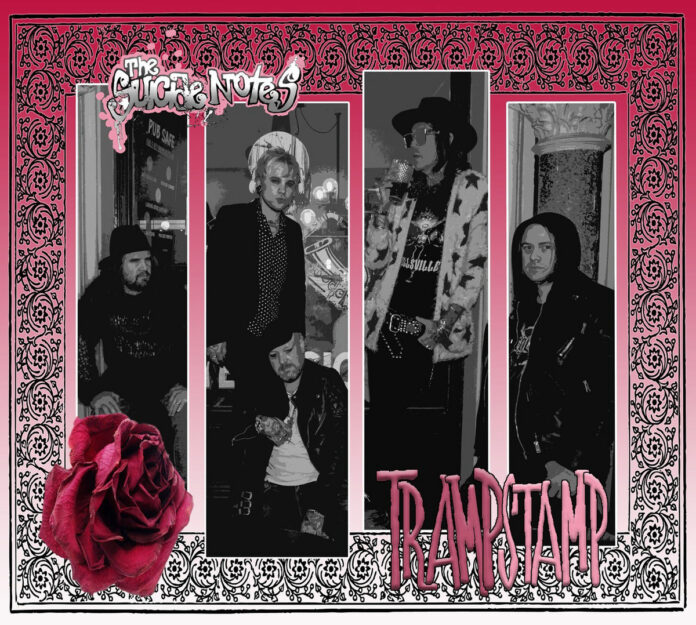 There’s a reason that I’ve always been The Stones over The Beatles.

While the boy band that was the “Fab 4” were wittering that they fancied holding hands, Mick and Keith were in their basement with doing all kinds with as many women as they could find.

The Suicide Notes haven’t come this far to do anything while the chaperone watches. Nope, they are the most rock n roll band in the world – and their cover of “Dead Flowers” manages to make it sound even more sleazy than the original. Full disclosure: I got into The Stones  properly when I was 18 and heard Gilby Clarke cover that very song on the seminal “Jail Guitar Doors” record.

The early to mid 90s references are ones that no doubt, TSN would get too, because (as I am almost contractually obligated to say every time I review their stuff) I am the biggest Dogs D’amour fan, and they sound just a little (ahem!) like the double D’s.

There’s that feeling in their music, you see, as there is in all great rock n roll, that it could end in tears in seconds, but for the time it teeters on the brink of righteous violence then there’s nothing quite like it. “Rollin’ With The Punches” adds a glam rock (think T-Rex) swagger to this, but there’s a real dirt under the finger nails.

The other original tune here, “Snakes Grin Within” is more of the same. This is the band that’s the house band in the Hells Angels Chapter in Oxford. The sort of blokes that would only go to the Bullingdon Club with Johnson and Cameron to steal their coke and mug them on the way out.

After that cover of “…Flowers” there’s an acoustic reworking of one of their own songs. “Black Dog Howlin’” is done acoustic – at odds with their electric version and it seems to lurk in the shadows with the explicit desire to beat you senseless – but then, the first Dog’s D’amour record I bought was an acoustic one too (and doubtless I said that in one of my other reviews, but whatever.)

The pandemic stalled The Suicide Notes a touch. But they are here, live and kicking and still the best underground nastiness there is. A trampstamp is – according to a friend of mine – one of those tattoos at the base of your back (she also called it a “slag tag”) but let me say right here and now that I’d cheerfully tattoo this to my nutsack: The Suicide Notes are brilliant*

*this was artistic license and I am not really gonna. “Trampstamp” is mighty mind you, and that is true.

Previous article
BAND OF THE DAY: COLOURS OF ONE
Next article
SIGNAL ROCKS