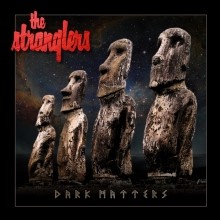 `Dark Matters` is The Strangler`s eighteenth studio album, their first since 2012’s `Giants` and their first studio album recorded without founding drummer Jett Black who retired from performing with the band in 2015. Also, sadly it`s the last to feature the playing of late keyboardist Dave Greenfield who died of Covid 19 last year. Dave features on eight of the album’s eleven cuts.

The album opens with `Water` in which a strummed guitar leads us into trademark Dave Greenfield keys on this arrangement that seems to be a blend of styles. A work that`s written about the Arab spring and the Middle East, the situation there, the importance of water and what happens if it runs out. It`s a number that the guys have played live on previous tours. We move to the up tempo `This Song` which to me was verging on the slightly menacing tracks of old. The band have said that the lyrics drove this idea that we can sometimes be trying to escape feelings and emotions that actually we need to confront head on. At times it`s spoken world with some flowing organ and thumping bass and wouldn`t have been out of place on 1977`s `No More Heroes` album.

`And If You Should See Dave..` is obviously a tribute to the band`s fallen comrade. A song written by Jean-Jacques Burnel to his bandmate and friend for forty five years. A perfectly poignant and emotional homage. To me what makes it a real choker is that it`s not overly sentimental but just kind of says hey you`re not here, but not forgotten and we`ll see you again. We have a larger than life number in `If Something’s Gonna Kill Me (It Might as Well Be Love) ` a delightfully expansive spacious, sprawling composition that again reflects on Dave Greenfield`s passing and his essence.

`No Man’s Land` is a brief stop start almost belligerent, challenging, questioning punk like offering. Singer and guitarist Baz almost becomes intimidating as he spits out the lyrics of “nobody move, nobody gets hurt”, wonderfully menacing. We have a real curve ball with `The Lines` a stripped back introspective submission with just vocals, organ keys and acoustic guitar that relates to the process of ageing.

`Payday` is a thumping piece that has to me a nostalgic texture about it. It was written about reaping what you sow and namechecks Socrates and Alexander The Great. The last minute or so it sort of veers off in a strangely amusing direction before returning to it`s the former pounding beat. An acoustic guitar and keys lead us along the quite starkly melancholic `Down`. A wistful and contemplative number that`s quite hauntingly sung.

`The Last Men on the Moon` is anthemic, almost a tribal call to arms. It had that sense about it of `Toiler On The Sea` one of my favourites from the 1978 `Black and White` release. There were some enchanting musical layers throughout `White Stallion` which was one of the last tracks that the band came together on. It relates to Trump and how the West has lost its global influence. It had some thoroughly delightful operatic orchestral qualities throughout.

The album closes with `Breathe` with lyrics that are nearly spoken word and have an almost otherworldly feel. The organ sound gave it a retro sixties cinematic ambience and we also enjoyed a restrained guitar solo towards the latter part that blended wonderfully.

I have to hold my hand up and say I had a lot of apprehension and trepidation before listening to this album but i have to say it exceed all my expectations. The hard work and dedication that producer Louie Nicastro put in to bring this album to life also needs to be acknowledged. To me this is a stunning tribute to the talents of the irreplaceable Dave Greenfield.

The remaining members of the band, Jean-Jacques Burnel, Baz Warne, and Jim Macauley will decide as to whether this album will be the bands final chapter but if it is, they have certainly gone out on a high.