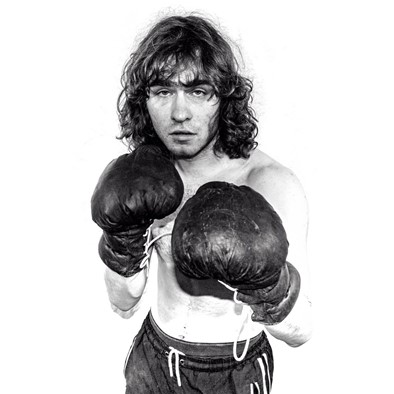 Zac Sinner, is a man on a mission: “We decided we wanted to keep it moving this year so we’re challenging ourselves to put out 3 EPs without any filler. Every song’s got to feel like it belongs and each EP will top the last, This one’s a good start, but it’s just the start.”

Skinner has been trying to find himself for years it seems. Stints as a jazz musician, a crooner, living with the Fat White Band, and hanging with Millwall fans. Hell, the flyer for his first gig reckoned he was influenced by Gene Vincent.

Because “Iconic” is a monument to the casual lifestyle. The bands twitter pic has Skinner in a tracksuit, in front of a gang of lads who look like the sort who are pulling wanker signs at the away coaches as they pass the home pub.

And that’s precisely why I am saying it here and now – not the end of the review, you can skip the rest, if you want: Skinner Brothers are going to be huge.

The reason for that is actually in the last song: “Away Days”. Acoustic, mainly. “I live for them away days. The Lions sing and we go crazy.” They are working class, possibly rough and ready, football fans, and brothers. Ringing any bells?

There is a touch of Noel and Liam in this as well, except SB have a sound of their own. “Iconic” has a couple of key lines: “Call that Billericay Dickie, man I am feeling wicked” is followed with, “I need to get on it”. Now, the way it’s delivered is interesting. Half spoken, in some London gangster voice (he’s actually from Basingstoke) but the effect is something close to a South East hold Steady. The same tales of drugs, nights out and parties, like they too realise, as it were, that “city centre’s over, no one really goes there”.

“More” offers a nihilistic view. But it does it in a Streets type way, but if some of the others have hinted at punk, hip hop, indie, you name it, then “Low” is one step away 70s glam rock, “I am a weekend offender, you know I got style” intones the lyric, and that’s it, really. There’s millions of people like them and they are all – potentially – Skinner Brothers fans. The Libertines built a legend on less innovation than this – and this seethes with a kind of anger that is impossible to quantify, but is palpable.

For all kinds of reasons this is one of the more interesting EP’s you’ll hear – not least the effortless anthemic nature of what they do – these brothers have channelled the spirit of the estates, the casuals, the unheard. Whether they are really “Iconic” time will tell, but you best ignore them at your peril.