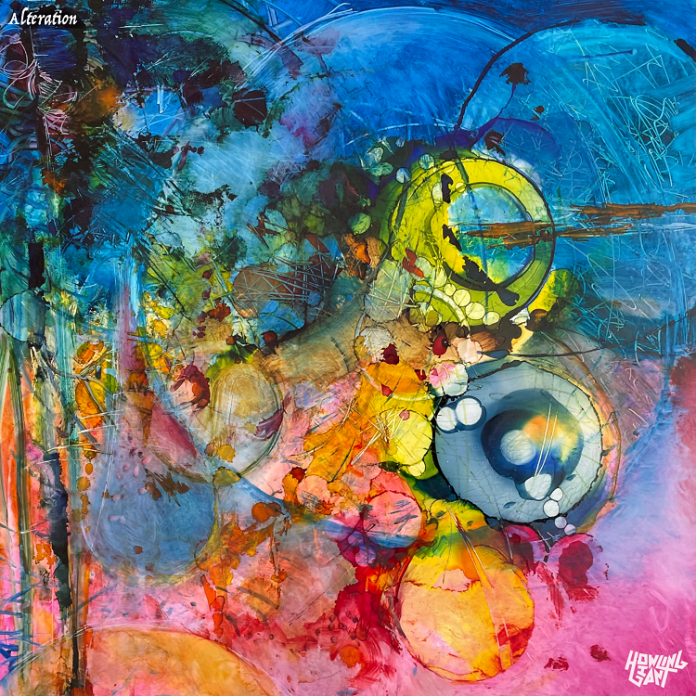 I have to say I find it difficult to review instrumental album and EP releases but having given heavy psychedelic rockers Howling Giant latest EP `Altercation` a quick listen, I thought i`ve really gotta give this a go. Howling Giant are a stoner metal/psychedelic rock band from Nashville, Tennessee, USA. The band have been active since 2014 have released one studio album `The Space Between Worlds` and a number of EP`s that are inspired by early sci-fi and horror with lyrics influenced by space travel. The band comprise Tom Polzine (guitar and vocals), Sebastian Baltes (bass and vocals), Zach Wheeler (drums and vocals) and with this EP they introduce their newest member Marshall Bolton (keys and synths). The ‘Alteration’ EP is the outcome of the band’s popular Twitch sessions, an American video live streaming service with each one of its four song titles being curated by the fans. “During the full band shows we ask the viewers to call out song names, then we wrote instrumental jams on the spot to match the song title. After going back and reviewing some of these jams, we decided it would be fun to actually record some of them in a more professional setting”

This extended play opens with `Understudy` with a grinding guitar riff, pounding drums, thumping bass and some expansive synth swathes. Welcome to the wonderful world of Howling Giant. Sit back and relax as for the next five minutes we`re on an epic journey through a powerful bruising metal assault. Along route we enjoy some intricate guitar riffs, and some sublime drum rolls that haven`t been heard since the sadly missed Neil Peart last graced us with his presence.  The bass, drums and guitar riffs become almost mesmerising at times before all too soon the track fades. There`s a more laid back feel to `Luring Alluring Rings` as we have some intricately shared guitar chords and drumbeats as the number slowly builds. Piano keys accompany the guitar and leads it to a place where it`s allowed to blossom. At times there`s almost a reflective introspective feel created by the guitar tones. The latter part seems to become like a gathering storm as all the guys pull together before a break in the clouds and we`re back to the intricate guitar shedding. A drum and bass line lead us quietly through and guide us to safety towards the end.

`Enemy Of My Anemone` is a strange title and maybe one of the groups fans is a horticulturist, as anemone seems to be the genus of flowering plants. As to the song, well it`s another number that grows as it advances with some wonderfully complex guitar chords almost surfing atop a bass and drum platform. It takes a bit of a stoner curve and conveys you into an almost trance like state before again ending fairly unexpectedly. We close out on `Farmer Maggot`s Crop` which has Mike T Kerr bringing his guitar skills to the party. It`s an almost closing of the circle, a mellow relaxed, carefree composition that seems to bring you back to earth safely.

This was a marvellous introduction for me to the joys of Howling Giant. It had me beating away with invisible drumsticks, pounding an imaginary bass, tinkling the ivories, and dusting off my rarely used air guitar to join along with this addictive psych metal quartet. This four tracker pans out at around twenty minutes so there`s no excuse not to block off a little time and allow these guys to take you on an irresistible psych-prog mind trip.