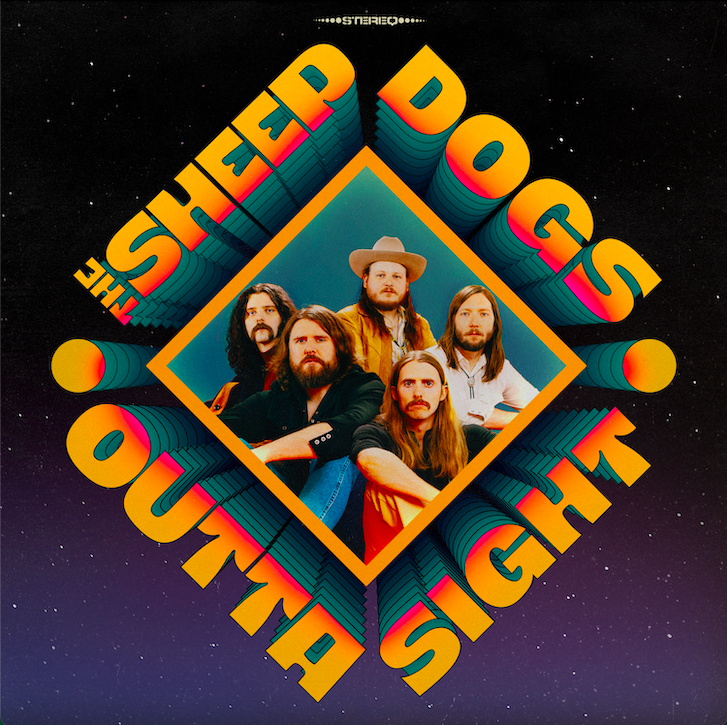 Always (unless its Shinedown) go and watch the support band. That’s my motto. Sometimes you see genius at work.

It’s January 25th 2016. And I was there to watch The Temperance Movement. The support band, though, The Sheepdogs, they were so good that I wrote this: “One of those bands that possess the ability to write timeless music; you could swear that you already know the song from the opening riff, but it’s an original not a cover. Somewhere between Skynyrd, Canned Heat, Credence Clearwater Revival and Curtis Mayfield, they are simply stunning.”

I am tempted to write the same thing on June 8th 2022, frankly. Because, “Outta Sight” is all that. But the thing is, its more. Way more.

Cliché alert. “….Sight” is the, well, sound of a band that’s returning to its roots, if you will. 2018’s “Changing Colours” was still a great record by most standards, but it wasn’t a great Sheepdogs record, it was them experimenting, trying new things. This one is a great Sheepdogs record. It’s perhaps their best. This one is straight up, good time rock n roll. You could try and not love it, you could try and resist it. There’s no point. It’s gonna get you in the end.

For 37 minutes 35 seconds precisely, this might well be the most fun, uplifting slice of stuff there’s been in 2022. “Here I Am” announces where they are, with the most glorious guitar, piano, and dollop of funk. “A world reborn” sings Ewan Currie, and maybe it is, but this sounds like the first steps to a recovery for sure.

That one is good. “Find The Truth” is better. At no point does this song – or this record – sound like it was released in 2022. It sounds like it was out in 1974 and played by denim clad blokes on the Old Grey Whistle Test. The twin guitars from Currie and Jimmy Bowskill are enough to make Thin Lizzy weep.

There’s a soul in this. Literally and metaphorically. “Only A Fool” brings it to the surface, and the fact that all these songs merge into one another with no gaps brings an urgency to work like “Waiting For Your Call”, a real chugger, but try and get it out of your head.

“Carrying On” dials up the country. Sun dappled and from Laurel Canyon with Joni Mitchell watching on, it seems, its laid back and totally content. “So Far Gone” adds a bit of drum machine to its shuffle, and you can almost hear it being played on Dukes Of Hazard episodes, while there’s a real groove to “Scarborough Street Fight”. A feelgood factor, if you like, an air of ‘come on, lets do this’ (and you imagine it’ll sound fabulous live too, where they’ll jam on it for sure).

The one ballad is the summer breeze of “Mama Was A Gardener”, and its lovely, but its not “Goddamn Money”. Goddamn, that thing rules. Very possibly the best song of the year, one thing though, try not to walk about your work singing “goddamn, it’s the son of Sam, spending all my time working for the man” (its chorus is so addictive it’s like Crack). Take it from me, yeah?

“Didn’t I” is another that sounds like a cover, but isn’t. “Roughrider ’89” is an Allman Brothers song. If it isn’t (it isn’t) it damn well should be, and I remain convinced that The Sheepdogs prove that time travel is real.

The purest, best, rock n roll anywhere. Rock n roll, indeed with the fat trimmed off. Nothing but the prime cuts. Nothing but the best. Heads down, straight ahead. Looking back to forge forward. “Outta Sight” is out of this world.