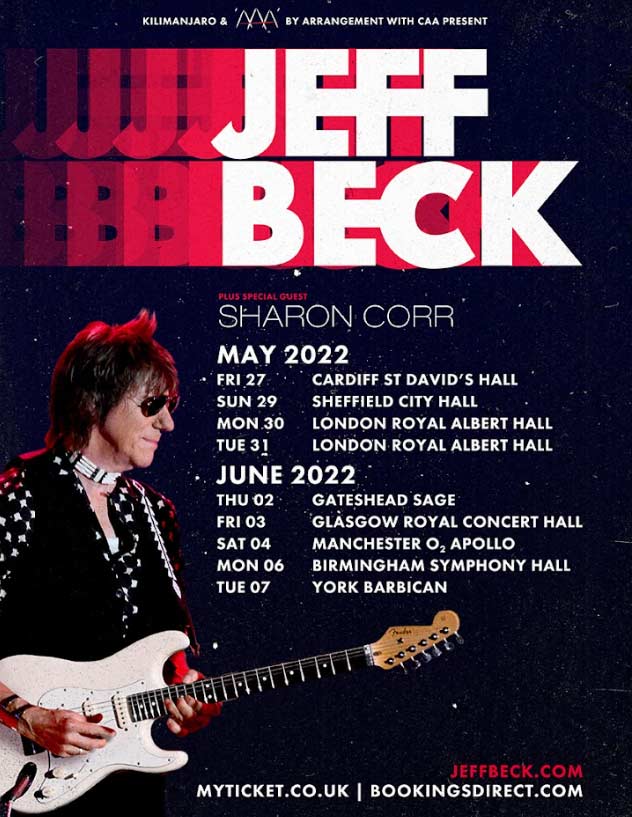 As England’s second city Birmingham has played host to pretty much every major musician on the planet.  Living in the West Midlands essentially means you can almost see a legend every week if you wish, depending on your musical style of choice.

This week saw guitar god Jeff Beck stroll into town.  Dressed like an older version of Marty McFly it takes him about 15 seconds to send the crowd back to the future.  Cheap line I know but you gotta put them in when you can.

The show starts in a strong fashion with “Star Cycle” from his excellent There and Back album in 1980.  It’s a funky and driving rocker that sets up the evening perfectly.  A cover of The Mahavishnu Orchestra classic “You Know You Know” follows in a slightly more melancholic and languid style but losing none of it’s emotive power.  By the time “Stratus” and “Nadia” are done the crowd are fully warmed up.

As is customary Jeff didn’t speak too much, aside from the odd thank you, but he provided the comedic moment of the evening when introducing “Rumble” by stating, in typical deadpan fashion, “this song has three chords in it…..watch out!!”  Another five tracks including the awesome “Hammerhead” and “Brush With The Blues” go by in the blink of an eye before, what can only be described as Beatlemania-esque squeals ring out across the city for the introduction of Jeff’s pal from Kentucky, otherwise known as Johnny Depp.

For those who may not be aware, yes there are some people out there,  Johnny Depp was a musician way before he made his feature film debut in A Nightmare On Elm Street in 1984 and it is something that he has consistently gone back to in downtime from his Hollywood career.  He had a short-lived project named P back in the 1990’s with Gibby Haynes (Butthole Surfers) and more lately is co-guitarist in Hollywood Vampires with rock royalty Alice Cooper and Joe Perry.  So he is not without kudos in the rock n roll fraternity and being good mates for a number of years with Jeff Beck, which produced and collaboration a couple of years ago and rumoured another one to come.

Depp’s introduction comes with the track “Heddy Lamar” a slow burner of song that suits Johnny’s voice well whilst allowing Jeff some laid-back noodling.  Where the “Jeff & Johnny Show” truly works brilliantly is in a couple of rasping covers.  John Lennon’s “Isolation” gets a modern re-working whereas there is a more faithful rendition of the brilliant “The Death and Resurrection Show” by Killing Joke is an absolute triumph.

Not every track works quite as well though as covers of Marvin Gaye’s “What’s Goin’ On” and Hendrix’s “Little Wing” fall a bit flat.  Johnny has a decent voice but not sure cover Marvin does him any favours whereas “Little Wing” has been cover by every artist so it doesn’t really add anything to show and perhaps another track from one of Jeff’s stunning back catalogue might have been a better option.  There was more than enough covers as it was.

Whilst Jeff gets the adoration, Johhny the screams we should not neglect the brilliant backing band, consisting of the uber-talented female triumvirate of Rhonda Smith (Bass), Vanessa Freebairn-Smith (Cellist) and Anika Nilles (Drums) who held everything together.

The show finishes with “Corpus Christi Carol” and The Beatles “A Day In The Life” and it’s fair to say that over 80 minutes, whatever those in attendance came for they received.  You can’t do more than that.