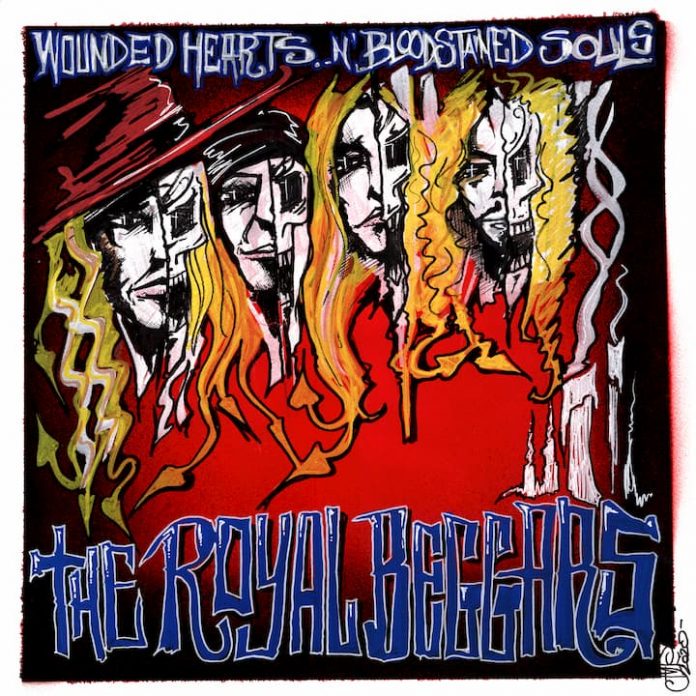 Being a geeky sort of kid – now a geeky sort of bloke – I became pretty interested growing up in the history of the Football Grounds of Great Britain, and in particular the work of Archibald Leitch. A Scottish architect, he designed stands up and down the land.

Brilliantly, he had a signature to these things. He always put a little point in the middle of the roof, so you always knew it was one of his. Some of them still last to this day.

Now, I know what you’re thinking. Shut up, stop boring us, and what has this got to do with Royal Beggars new EP. Valid point in fairness, and answered thus. Basically, it’s how my mind works. I am not going to lie about it, I’d never heard of Royal Beggars before about four days ago, and yet I knew exactly what this sounded like and furthermore that it would get reviewed.

How? Easy. That’s Tyla from Dog’s D’Amour’s artwork on the cover, that is. It was obvious before I’d even read that it was. And such a mark of class works better than a By Royal Appointment around here.

Three seconds into “Wasted N Wanted” and its clear you have a new favourite band to think about. Cowbell, some kind of Stones’ “Sticky Fingers” era rock n roll swagger, a solo that best be played by guitarist Jonas Heimdahl somewhere by his ankles so low-slung is it.

And these boys are ready to die for what they believe in. And what is it? Well, rock n roll, brother. What else?

The chorus says so.

That geeky kid reading books on football grounds? Well he also loved a mooch around bargain bin’s in Woolworth’s for tapes. One day I struck gold and found “Graveyard Of Empty Bottles” by Dog’s D’Amour,  and for 31 years I have been searching for music that sounds exactly like “Broken Heart Of Glass”, utterly glorious, cracked, fragile, but with the heart of The Faces (and no, I didn’t know The Faces in 1989).

And pretty much, that’s what Royal Beggars do. They do two sorts of music. They do rock. And roll. They’re Swedish, that classic sound of their countrymen Diamond Dogs is stamped all the way through, “How Do You Do” and Dan Baird and Warner E. Hodges would be proud of the bluesy harmonica driven, whiskey soaked licks of “Lay Me Down To Rest”.

There is some brilliant songwriting skill here too – the band are all veterans and one version of their embryonic selves included London LeGrand of Brides Of Destruction. David Roobert was the bass player in that early outfit, but his decision to move front and centre has proven to be damn near perfect given “Lonely Dead Red Rose” and the likes.

The thing about this sort of rock n roll is that gave you the chance to pretend you didn’t like the ballads when secretly they spoke to you in myriad ways. There’s a reason after all, that The Quireboys still play “I Don’t Love You Anymore” and all the blokes sing it, and in that spirit comes “Heartbreak Lullaby” which ends this thing in the manner of all weather-worn, smoke yellowed road dogs.

Whether you are one of them, or just a 35 year lifer in rock n roll fandom, then I am telling you that Royal Beggars are your boys. “Wounded Hearts And Bloodstained Souls” does more than live up to its title. It lives up to its artwork, and that is the highest standard you can get.