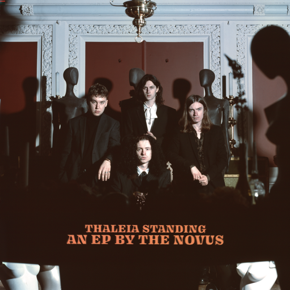 Stourbridge is not by any stretch of the imagination a picture postcard tourist destination. But saying that this market town, twelve miles from Birmingham and sitting on the western edge of the Black Country and The West Midlands has always enjoyed a reputation for punching above its weight. Famous for glassmaking which has been manufactured there since the early 1600s, even its Southern League Premier Division football team Stourbridge FC or “The Glassboys” managed to reach the third round of the F.A. cup not so long ago. But what sets this town apart are the bands that have been spawned from it`s depths such as The Wonder Stuff, Pop Will Eat Itself, Ned`s Atomic Dustbin and the wonderful Diamond Head. Another band that hope to add themselves to this list are The Novus, who take their influences from 70s psychedelic rock to contemporary post-punk. This quartet, Connor Hill (vocals), Thomas Rhodes (guitar), Tyla Challenger (bass) and Euan Woodman (drums) have a five track EP `Thaleia Standing` released this month.

This extended play opens with `I Serve Not` and a clanging sound akin to a metal bar hitting an unyielding surface and some delightfully fuzzy bass guitar. Connor`s vocals join in an almost languorous manner but with an underlying hint of menace. The lyrics seemed a little oblique but possibly a metaphor for not trusting institutions or the establishment to do all they say they will. The number has a real almost threatening swagger about it, and I have to say I loved the drums as they drove the number to its deafening climax. There seemed to be a more retro garage rock vibe about `Hate Is The Cancer` but as the vocals joined in, it reminded me slightly of some of the more interesting numbers that Bauhaus used to share, not quite `Dark Entries` but heading there. The vocals are shared in an almost spoken word style at times and were quite breathlessly shared, marvellous stuff.

`Overdriven` has a sort of Hendrix meets Sabbath riff like opening to it with vocals that are delivered atop in an almost detached manner. A delightfully heavy bluesy slice of post punk, a kind of no nonsense strut. A song that touches on mental health and how its only now being recognised as a subject that possibly should be taught comes with `Castaway` A recognition that its normal to undergo and have dark days delivered against a quite mature musical backdrop. At times, I felt that it nodded towards Joy Division.

We close out with `Journey With No End` which the band have described as a track that is a milestone and a perfect bridge for what`s to come and I’d have to say that`s a fair summation.

It begins with the resounding, unsettling statement of “The cool black waves they sweep me away, the darkness of the night that swallows my life, am I put together just to be torn apart, I don’t know, I don’t know, I don’t know” and heads into a wonderfully psychedelic surge and wall of noise. There are similar dark sentiments along this journey that gathers pace and spirals to a blistering crescendo.

The Novus have been described in the press as “the most powerful thing to come out of Birmingham since the industrial steam engine” and “Black Sabbath’s art-raged grandchildren” and on the strength of this release it`s hard not to agree. I have to admit that, although coming from Birmingham, The Novus seemed to have somehow passed me by. There was so much to relish on this EP and with some dates pencilled in locally, i`m hoping to get to see them strut their stuff in a live setting.

Taking a line from their Stourbridge grebo forefathers all I can say about these guys is “Grrrr! Wise up Suckers and Give Me More!”